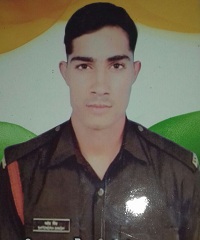 Sepoy Satendra Singh Yadav, hailed from Vegampur village in Mathura district of Uttar Pradesh,  was born to Ramgopal Singh and Rajvati Devi on Nov 14, 1992. Sepoy Satendra Singh was fourth among six siblings;  he had three elder brothers and two younger brothers.  He completed his primary and secondary education from his home town Vegampur and as a true patriot and a responsible son he decided to join Indian Army when he was 19-year-old to serve the motherland as well as support his family financially.

He joined his unit after completing his training in Bangalore Training Center. His first posting was in Rajasthan where he served for a couple of years and later was posted to various places, the last one being Leh where he served for two years.  Sepoy Satendra Singh Yadav was married to Suman and they had one daughter.

Besides being a tough and dedicated soldier, he was an excellent sportsman and had been participating in various sports events from his school days.

During 2017 his unit was deployed in Leh and by that time he had put in about 6 years of service and had evolved into a committed soldier. He also had gathered vast experience by virtue of participating in numerous counter-insurgency operations during his short service career. On 10th March 2017, while on duty,  Sepoy  Satendra Singh Yadav was part of a military convoy. His vehicle which was carrying the operational stores was hit by a landslide between Karu and Tangste. He was badly injured and succumbed to his injuries and thus sacrificed his life while doing his bit to keep our border safe.

Sepoy Satendra Singh Yadav is survived by his wife Suman and a daughter who was  7 days old (born on 3rd March 2017) when Satendra singh laid down his life in the service of the nation.