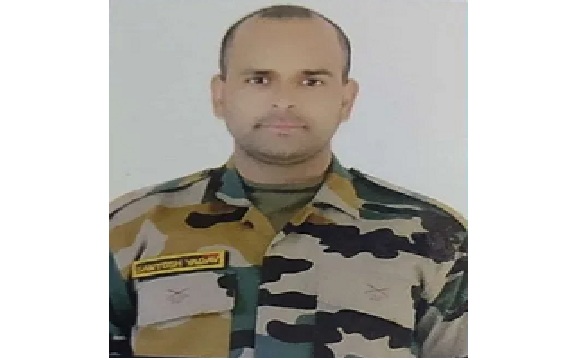 Place of birth : Deoria Dist, UP

Sepoy Santosh Yadav hailed from Tadva village of Rudrapur tehsil in Deoria district of Uttar Pradesh. Son of Shri Sheshnath Yadav and Smt Maina Devi, Sep Santosh Yadav had a brother and sister as his siblings. He joined the Army in the year 2011 after completing his school education at the age of 18 years. His younger brother Manoj too joined the Army motivated by his brother. He was recruited into the Mahar Regiment, a regiment of the Infantry known for its fearless soldiers and numerous battle honours.

After serving for sometime, he got married to Ms Dharmshila and the couple had two daughters. Later Sep Santosh Yadav was deputed to serve with 1 RR battalion deployed in J & K for counter-insurgency operations.

During Feb 2022, Sep Santosh Yadav's unit 1 RR was deployed in the Shopian district of J & K along the LOC. As a number of militants were active in the unit’s AOR(Area of Responsibility), the unit troops had to maintain a very high state of preparedness at all times and had to undertake operations at a short notice. Based on the information from the intelligence sources, about the presence of some hardcore militants in the Chreymarg area of the Shopian district, the security forces decided to launch a search and cordon operation in the suspected area on 19 Feb 2022. Sep Santosh Yadav was made part of the team that was assigned the task of undertaking this operation.

As planned the security forces launched a joint operation on 19 Feb 2022 comprising the elements of 1 RR from Army, CRPF and SOG(Special Operations Group) of J&K Police. Sep Santosh Yadav and his comrades reached the suspected area in Tsermarg village of Shopian district in the early morning of 19 Feb. As the operation was underway and the troops closed in towards the suspected house, a heavy automatic fire was drawn from the house endangering the civilians present around the house. Sensing that the lives of many civilians would be in danger, the troops evacuated the civilians including ladies and children to a safe location and engaged with the terrorists.

Sep Santosh Yadav and his comrades managed to eliminate one terrorist and swung into action to take on the rest of them. The gun battle continued for several hours as the terrorists were heavily armed and the troops were trying their best to minimize the collateral damage. However during the fierce exchange of fire, Sep Santosh Yadav and Sep Romit Tanaji Chavan severely injured. They later later succumbed to their injuries and were martyred. Sep Santosh Yadav was a brave and committed soldier, who laid down his life at the age of 28 years in the line of his duty.