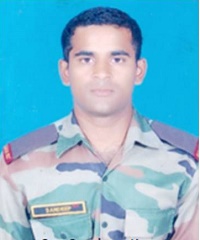 Sepoy Sandeep Kumar (27) was native of Devihalli village of  Hassan district in the state of Karnataka. Inspired by his grandfather and his uncle Manju Shetty, who had earlier served in the Indian Army, he had joined the service and was posted in Gujarat before being shifted to Kashmir. He was in his eighth year of service in the 13th Mahar infantry regiment and was serving in J & K area under 51 RR unit in 2017. Sepoy Sandeep had visited his village from November 9th to 11th in 2016 for the consecration of a temple at Devihalli. During his visit, he got engaged also and his marriage was slated to be solemnized on April 17.

Sepoy Sandeep Kumar was one of the 15 soldiers who died in an avalanche at Gurez sector of North Kashmir on 25th Jan 2017. There was heavy snowfall before the accident, resulting in multiple avalanches in Jammu and Kashmir. The Chandigarh based Snow and Avalanche Study Establishment had warned of more avalanches in Jammu and Kashmir and Himachal Pradesh before the accident took place. The first avalanche hit Gurez on 25 of January morning, in which a family of four civilians had died. The second took place around the same time in Sonmarg, chiefly a tourist area, where an army camp was located.

The avalanche that proved deadly for the army hit the post at Neeru village in the night of 25 Jan 2017. The post at Neeru village was located in Tulail area, 25 Kms away from Gurez town in North Kashmir. The place located along the LOC normally remains cut off by road in winters. The avalanche hit the area few hundred meters away from HQs of 51 RR unit and trapped the soldiers, who were on patrol. The army dispatched the rescue teams and seven soldiers could be rescued but, Sepoy Sandeep Kumar, who had been buried in snow, could not be saved.

Sepoy Sandeep Kumar is survived by his parents, Puttaraju and Gangamma.