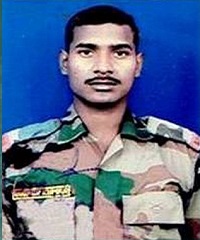 Sepoy Randhir Kumar hailed from Katihar in Bihar and had joined the army after completing his schooling. He was recruited into 3 Bihar battalion of the Bihar Regiment, an infantry Regiment well known for its gallant soldiers. After serving for few years at various operational areas, Sep Randhir Kumar was posted to Siachen area as part of Operation Meghdoot.

During 2017, Sep Randhir Kumar was serving with his unit that was deployed at Siachen area. The unit was deployed in Saltoro ridge in Siachen glacier in Ladakh region of Jammu & Kashmir. Siachen, the second longest glacier in the world and known as the world’s highest battleground, was situated at an altitude of 5,700 meters. The extreme low temperatures – which could drop to minus 60 degrees Celsius during winter – claimed hundreds of lives since 1984, when India and Pakistan moved to station their troops on the Glacier. The soldiers at the Saltoro ridge located about 20 Kms north west of Siachen had to fight not only the treacherous enemy but the extreme hostile weather too on a daily basis.

On 19 June 2017, Sep Randhir Kumar was deployed on Bana post, which at 22,153 feet, was the highest peak in the area. The post enabled the soldiers to see 80 kilometers away, across the entire Siachen glacier. From here, the troops could also observe the other important Indian positions on Sonam and Amar posts adjoining the Bilafond La pass. That day Sep Randhir Kumar on a patrol duty had to traverse through harsh icy terrain when he became a victim of unforgiving weather conditions. Despite battling valiantly, he lost his life and was martyred. Sep Randhir Kumar was a valiant and dedicated soldier who laid down his life at the age of 25 years, in the line of his duty, following the highest traditions of Indian Army.