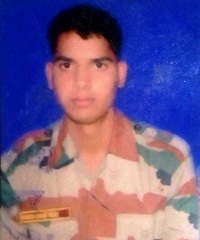 Sep Ramesh Chand Yadav hailed from Kaluka village of Alwar district in Rajasthan. Son of Shri Dinesh Singh Yadav, Sep Ramesh Chand was youngest of the three siblings. After completing his schooling he joined the Army and was inducted into 21st Battalion of Kumaon Regiment, a Regiment well known for its fearless soldiers and many battle honours.

During May 2016, Sepoy Ramesh Yadav’s unit 21 Kumaon was deployed in Kupwara district of Jammu Kashmir for counterinsurgency operations. His unit was operating very close to Line of Control in an area that was very prone to infiltration by the militants from across the border. The unit troops were engaged in close monitoring of infiltration routes and had to maintain a very strict vigil through armed patrols all the time. Based on reports from intelligence sources, Sepoy Ramesh’s unit was tasked to detect and prevent infiltration from across the border on 06th May 2016. Consequently, a search and destroy operation was planned by the unit to deal with the threat of the militants. As planned the assault team including Sep Ramesh Yadav reached the suspected area and launched a search and cordon operation in Gujar Dori area. The team soon made contact with the militants who fired at them on being challenged. A fierce gun battle ensued thereafter with a heavy exchange of fire.

The militants were heavily armed and were firing at the troops from vantage points. But Sepoy Ramesh Yadav and his comrades continued to give a befitting reply to the firing by militants. However, during this exchange of fire Sep Ramesh Yadav got hit by a bullet and was critically wounded. After providing the immediate first aid he was evacuated to the 92 Base Hospital at Srinagar. However he later succumbed to his injuries and was martyred. Sep Ramesh Yadav was a gallant and dedicated soldier who laid down his life in the service of the nation.