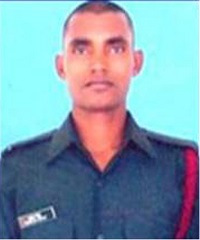 Sepoy Rakesh Singh was 28 years of age and belonged to Village Baddja, Dist Kaimur, Bihar. Sep Rakesh had joined the Army in 2008 and was the only one to join the army in his family. He belonged to 6 Bihar Regiment and was among the 19 brave hearts who laid down their lives in the line of duty in September 2016 when Pakistani terrorists struck the Army’s Administrative base in Uri sector of J & K.

Sepoy Rakesh Singh is survived by his wife Kiran Kushwaha and their son Harshit.