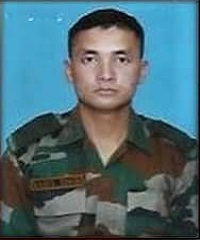 Sep Rahul Rainswal hailed from Riyasi village in Vamangaon tehsil of Champawat district in Uttarakhand and was born on 1st Jan 1994. After completing his school education, Sep Rahul joined the army at the age of 19-years. He was recruited into the 18 Kumaon Battalion of the Kumaon Regiment, an Infantry Regiment with a glorious history of bravery in various operations.  After serving for a couple of years with his parent unit, Sep Rahul was deputed to serve with 50 RR Battalion, deployed in the Kashmir valley for counter-insurgency operations. Sep Rahul later got married to Ms. Pinky in the year 2018 and the couple had a daughter.

During 2019-20, Sep Rahul was serving with 50 RR Battalion deployed in Pulwama district of J&K. The battalion’s AOR (Area of Responsibility) fell in the region where many militants were active. Following the terrorist attack in Feb 2019 on a CRPF convoy, the security forces had stepped up their operations against the militants. The unit troops had to maintain a very high state of alert at all times to deal with any eventuality. In the 3rd week of Jan 2020, the security forces received credible information from intelligence sources about the presence of some hardcore militants in the Khrew area of Awantipura in Pulwama district. After analyzing the inputs it was decided to launch a joint operation with the elements of the army, J&K police, and CRPF.  Sep Rahul was made part of the team from 50 RR Battalion that formed the joint assault team for the operation. As planned the operation was launched on 21st Jan 2020.

Sep Rahul and his team members reached the suspected area in Awantipura and launched a search & cordon operation. As the cordon was being tightened the militants felt threatened and started firing indiscriminately to break the cordon. A fierce gun battle followed thereafter with the heavy exchange of fire. The security forces managed to eliminate two terrorists during the operation. However, during the exchange of fire, Sep Rahul received multiple gunshots and was seriously injured. He was immediately shifted to 92 Base hospital at Srinagar for medical treatment but could not be saved. He later succumbed to his injuries and was martyred. Sep Rahul was a valiant and dedicated soldier who laid down his life at the age of 26-years in the service of the nation. Sep Rahul Rainswal was given the gallantry award, “Sena Medal”  for his exceptional courage, devotion to duty, and supreme sacrifice.

Sep Rahul Rainswal is survived by his wife Mrs. Pinky and a daughter.