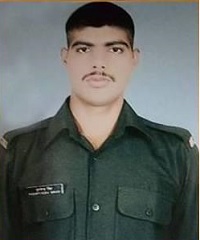 Sepoy Pushpendra Singh hailed from Khutia village of Mathura District in Uttar Pradesh. Son of Sri Tej Singh, Sep Pushpendra was born in the year 1987 and joined the Army in 2011 . He was recruited into 20 Jat of the famed Jat Regiment , a regiment known for its fearless soldiers and numerous battle exploits. Sep Pushpendra Singh got married at the age of 27 years to Sudha, a resident of Agra on 17th Feb 2016, and the couple had a son, Siddharth.

During 2018, Sepoy  Pushpendra Singh’s unit was deployed in Tangdhar sector of North Kashmir in Kupwara district along the LOC. India shares a 3,323-km border with Pakistan, of which 221 km of the IB and 740 km of the LOC fall in Jammu and Kashmir. The LOC is highly active and volatile where cease fire violations occur very often. On 13th Aug, 2018 Pakistani troops violated the cease fire  and started heavy mortar shelling on Indian Army Posts. Indian Army retaliated strongly, effectively and appropriately to the unprovoked ceasefire violation and the exchange of fire continued for several hours.

Sepoy Pushpendra Singh is survived by his wife Sudha, son Siddharath and parents.