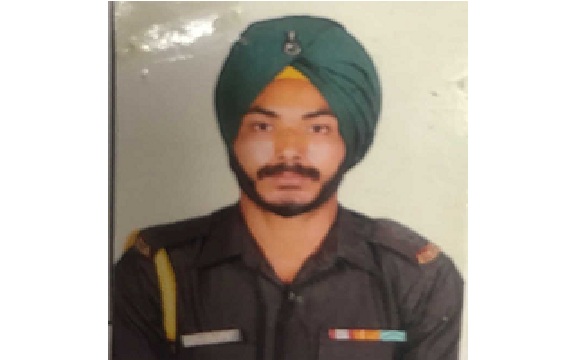 Sepoy Pargat Singh hailed from Karnal in Haryana. Son of Sri Ratan Singh, Sep Pargat Singh had done ITI course from Karnal and had joined NCC for two years. He joined the Army in June 2006. He was enrolled into 2 Sikh Bn of the Sikh Regiment, an infantry regiment known for its dauntless soldiers and numerous battle honours. After serving for some time, he got  married to Ms. Ramanpreet Kaur and the couple had a son. He was also part of United Nation’s Peace Keeping mission for one year in 2012-2013.

During 2017, Sep Pargat Singh’s unit was deployed along the LOC in Keri sector in Kupwara district of J & K. The LOC in that sector was very volatile and active where the enemy often resorted to unprovoked firing.  Apart from manning various stationary posts, the area was monitored and guarded by the security forces by employing armed patrols on a continuous basis. On 23rd December 2017, around noon time, the Pakistani forces indulged in ceasefire violation and resorted to unprovoked firing.

During that time an armed patrol of the Sikh Regiment led by Major Praful was on a regular patrol of the area. At around 1215 hours Pakistani troops who were hiding at Brat Galla in Keri sector targeted the army patrol team. The heavy firing was accompanied by the artillery fire from across the border indicating that it was a pre-planned dastardly attack. The patrol team leader Maj Praful Moharkar and three of his troops Lance Naik Gurmail Singh, Lance Naik Kuldeep Singh and Sep Pargat Singh took direct hits and got seriously wounded. Sep Pargat Singh later succumbed to his injuries and laid down his life in the service of the nation.

Sepoy Pargat Singh is survived by his wife Smt Ramanpreet Kaur and a son.