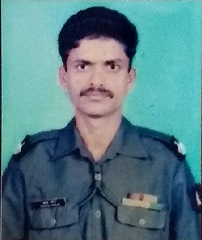 Sep Pagar Sharad Pralhad hailed from Kalamdari village in Nasik district of Maharashtra. Son of Shri Pralhad Devram Pagar and Smt Durgabai Pralhad Pagar, Sep Pagar Sharad was born on 2nd Jun 1996. After completing his school education Sep Pagar Sharad joined the army at the age of 20 years on 24th Oct 1996. He was recruited into 19 MLI of the Maratha Light Infantry Regiment, an infantry regiment known for its brave soldiers and numerous battle honours.

By 2005, Sep Pagar Sharad had completed around nine years of service and had developed into a committed soldier. During these years, Sep Pagar Sharad served in several operational areas in J&K, Rajasthan and Arunachal Pradesh. After serving for few years Sep Pagar Sharad got married to Ms. Bharti on 17th Apr 2001 and the couple had a daughter Tanuja and son Amol.

During 2005, Sep Pagar Sharad ‘s unit was deployed along the LOC in J&K for counter-insurgency operations. As the area of operation (AOP) of the unit was prone to infiltration by the militants from across the border, the unit had to maintain a high state of alert at all times. The unit launched regular patrols to monitor the suspicious movements. On 1st Jan 2005, Sep Pagar Sharad was part of one such armed patrol along the LOC. The patrol area also had very hostile weather conditions with many avalanche-prone areas. The patrol party of Sep Pagar Sharad had to face the brunt of one such avalanche on that day.

Sep Pagar Sharad Pralhad was a valiant soldier who laid down his life in the line of his duty. He is survived by his wife Smt Bharti, daughter Tanuja and son Amol.