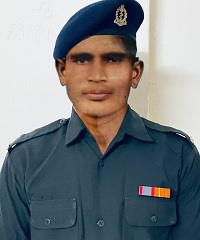 Place of birth : Ghaziabad Dist (UP)

Sepoy Om Prakash Tyagi hailed from Hisali village in Muradnagar city of Ghaziabad district in Uttar Pradesh. Son of Shri Dalip Singh Mukhiya and Smt Shankari Devi, he was born on 01 June 1933. He did his initial schooling from his native village and thereafter completed his graduation from MMH college at Ghaziabad. He then joined the Army on 26 Apr 1957 at the age of 23 years. He was recruited into the Army Medical Corps, a specialist corps of the Indian Army which primarily provides medical services to all Army personnel during peace as well as war.

After serving for sometime, he got married to Ms Shikshvati and the couple had two sons Sheel Kumar and Devendra. Very early in his service career, Sep Om Prakash Tyagi got the opportunity to get involved in active operations. As the war clouds gathered in NEFA(North Eastern Frontier Agency) the present day Arunachal Pradesh, Sep Om Prakash Tyagi got deployed with 24 Field Ambulance along the Chinese border in support of Infantry troops.

During the Indo-China war of 1962, Sep Om Prakash Tyagi's unit, 24 Fd Amb was deployed on the NEFA border, the main battle ground for the war. Though a full-fledged war broke out between India and China on October 20, 1962 when the People’s Liberation Army of China invaded Ladakh and Arunachal Pradesh (then known as the North East Frontier Agency) in a synchronized move, the border attacks had already started much earlier. After the Chinese incursion at Dhola post in Sep 1962 and subsequent developments, the Indian forces were ordered to withdraw from the forward posts in NEFA.  As a result, a withdrawal plan was put into action and the troops were deployed to facilitate a safe withdrawal of men and material.

On 21st Oct 1962, Chinese army attacked the Indian army post in large numbers accompanied with heavy Artillery fire. Despite being outnumbered, the infantry battalions fought the enemy forces with extreme courage and bravery. 24 Fd Amb with Sep Tyagi was also in the forefront to deal with any medical exigencies. However, during the heavy exchange of fire, Sep Tyagi got severally injured. He later succumbed to his injuries and was martyred. Sep Om Prakash Tyagi was a valiant soldier, who displayed commendable devotion to duty and laid down his life at the age of 29 years in the service of the nation.