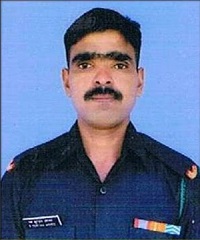 Sepoy Mushtaq Ahmed S of 19 Madras belonged to  Parnapalle, in Kurnool Dist, Andhra Pradesh and had joined the 19th Battalion on September 21, 2004. Sepoy Ahmed took part in Battalion’s counterinsurgency in the North East as also in the state of Jammu and Kashmir. He later volunteered to join Rashtriya Rifles and was deployed in counter-insurgency operation again in Jammu and Kashmir. On August 15, Sepoy Ahmed volunteered to be inducted in the Siachen Glacier at an altitude of 19600 feet, having the sub-zero temperatures. He is survived by wife S Nasimun and his parents.

Soldiers face extreme risks in manning the inhospitable terrain at heights of 21,000 feet under extreme weather conditions on the world’s highest battlefield. Avalanches usually take place due to an accumulation of snow and are triggered by morning sunlight. In other cases, when the slope of accumulated snow is between 60 to 80 degrees, the instability leads to an avalanche. Although the Army has a unit of the Snow Avalanche Study Establishment (SASE) in Jammu and Kashmir, with several observatories at various locations to issue warnings and alerts to the Army formations and units, it could not detect this avalanche and the cause also could not be known.