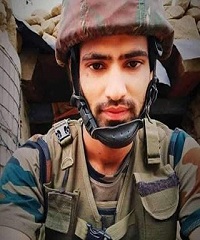 Sepoy Mohsin Khan hailed from Kolinda village in Jhunjhunu district of Rajasthan. Son of an army veteran Subedar Sarvar Khan and Smt Bilkis Bano, Sep Mohsin Khan was youngest among four siblings. His elder brother Grenadier Amjad Khan too served in the Army in the same Regiment. Born in the year 1998, Sep Mohsin Khan always wanted to serve in the Army like his father since his younger days. He eventually joined the Army after completing his school education in the year 2017 at the age of 19 years. He was recruited into 16 Grenadiers of the Grenadiers Regiment, an infantry Regiment known for its brave soldiers with a rich history of various battle honours.

During Jul 2020, Sep Mohsin Khan’s unit was deployed in Rajouri district of J&K. The unit troops were manning the forward posts in the Nowshera sector along the LOC.  The LOC remained highly active and volatile with ceasefire violations occurring very often and without any warning. Like the previous years, the year 2020 too continued with ceasefire violations. Pakistan continued to violate the 2003 ceasefire agreement with India despite repeated calls for restraint and adherence to the pact during flag meetings between the two sides. Besides manning the forward posts, the unit also launched regular armed patrols to check any infiltration from across the border. On 31 July 2020, Sep Mohsin Khan was part of one such patrol in the Nowshera sector along with few more soldiers.

In yet another case of ceasefire violation, Pakistani troops opened unprovoked fire in Nowshera sector along the LOC on that day and also fired some sniper shots at the patrol. Sep Mohsin Khan, who was moving along the designated route of the patrol, received gun shots fired by the enemy sniper and got seriously injured. He later succumbed to his injuries and was martyred. Sep Mohsin Khan was a valiant soldier, who laid down his life at the age of 22 years in the line of his duty.