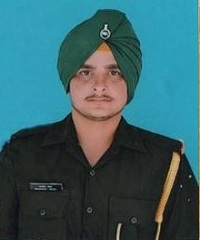 Sepoy Manjinder Singh hailed from Banawali Village in Mansa district of Punjab and was born on 25th Apr 1995. Son of Shri Gurmel Singh and Smt Karamjeet Kaur, Sep Manjinder Singh  had  joined  the  army at the age 20 years on 11th June 2015. Sep Manjinder Singh was an excellent sportsman and had brought laurels to the village while participating in national-level kabaddi tournament. He was also part of the Punjab state kabaddi team. He was recruited into 10 Sikh of the Sikh Regiment, an infantry regiment well known for its gallant soldiers.  After completing his initial training, Sep Manjinder Singh got posted to Rajasthan area as his first assignment. Later he was transferred to serve with a field unit deployed in J&K.

During November 2017, Sep Manjinder Singh’s unit was deployed in the Kulgam district of the Kashmir valley. As the AOR (Area of Responsibility) of the unit was severely affected by the militant’s activities, the unit troops had to undertake operations against the militants on a frequent basis. One such operation was launched on 14th Nov 2017 by the unit based on the information from the intelligence sources about the presence of the militants in its AOR. Sep Manjinder Singh was made part of the team that was tasked to undertake this operation. As planed the troops reached the suspected area of Nowbug Kund village in the Qazigund area of Kulgam and launched a search and cordon operation.

Soon the troops made contact with the militants who fired at them on being challenged. During the following gun battle, Sep Manjinder Singh was hit by a bullet and was critically wounded. He was immediately evacuated to the 92 Base hospital in Srinagar for medical treatment. However, he later succumbed to his injuries and was martyred. Sep Manjinder Singh was a brave and dedicated soldier who made the supreme sacrifice at the age of 22 years in the line of his duty.