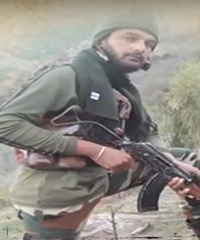 Sepoy Mandeep Singh hailed from Alampur in Punjab. Son of Mr. Gurnam Singh, Sep Mandeep Singh joined the Army in the year 2015. He was recruited into 22 Sikh of the famed Sikh Regiment known for its valiant soldiers and various battle honours. During 2017-18, Sep Mandeep Singh’s unit was deployed in Poonch district of J & K along the LoC.

The Krishna Ghati sector in Poonch district of J & K along the LoC is very volatile as the Pakistan troops resort to cross border firing very often in this area. During Jan 2018, Sepoy Mandeep Singh’s unit was deployed in this sector and its troops were manning various forward posts along the LoC. On 20 Jan 2018, Pakistani troops violated the ceasefire along the Line of Control in Krishna Ghati sector and resorted to heavy mortar shelling of various  Indian Army posts and civilian areas. Pakistani Army initiated indiscriminate firing of small arms, automatics, 82 mm and 120 mm mortars since morning hours on that day.

Sepoy Mandeep Singh is survived by his parents and brother and a sister.