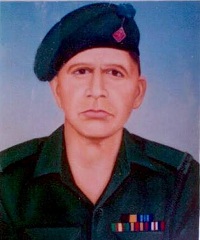 Sepoy Man Singh hailed from Khera village in the Jhajjar district of Haryana and was born on 12th April 1926. Son of Shri Sampat Singh, Sep Man Singh joined the army on 12th April 1945 at the age of 19 years. He was inducted into 1 (Para) Battalion of Kumaon Regiment, an infantry Regiment widely known for its fearless soldiers and various battle honors. As the war with Pakistan broke out in late 1947, Sep Man Singh’s unit got deployed in the western sector.

During Jan 1948, Sep Man Singh’s unit was deployed in the Poonch sector of J&K and was in the thick of operations against Pakistani forces. The unit under the command of Lt Col Pritam Singh was functioning under the control of 161 Inf Bde.  The unit position in the Poonch sector was attacked by the enemy forces on 25 January 1948. At that time Sep Man Singh was manning one of the pickets which were protecting the front sector of the key defensive position. The enemy force exceeding 200 in number approached close to the picket perimeter under cover fire from six LMGs. The attack was ferocious and Sep Man Singh’s platoon suffered about 50 percent casualties.

Sensing the gravity of the situation, Sep Man Singh realized that the enemy LMGs had to be silenced somehow to stop  enemy advance and prevent further casualties among his own troops. Displaying raw courage, he came out of his trench and ran forward hurling grenades towards the enemy LMGs. He managed to silence two of the enemy’s LMGs which blunted the enemy attack to a large extent. However while doing so, he received a burst of LMG fire on his head. Despite being seriously wounded, he lunged forward and threw another grenade smashing one more enemy LMG. He then succumbed to his injuries and was martyred. Sep Man Singh was a gallant soldier, who laid down his life at the age of 22 years in the line of his duty.

Citation for the ‘Maha Vir Chakra’ awarded to him reads:-

On 25 January 1948, Sep Man Singh was in a picket in Poonch in the J & K Sector when it was very strongly attacked by the enemy more than two hundred strong. His platoon was holding the front sector of the key defensive position. They approached close to the picket perimeter covered by their six LMGs and grenade discharges firing very heavily from a distance of about 400 yards. Sep Man Singh’s platoon had suffered about 50 percent casualties and the enemy was going to rush in at any moment.

Sep Man Singh, on his own initiative, came out of his slit trench and ran forward engaging the enemy with grenades and eventually succeeded in silencing two of the enemy LMGs. In the meantime, a burst of LMG fire hit him on his head. In spite of the mortal wound sustained by him, he fired another grenade saying, “I’m finished but I will finish you too”, and thus smashed another enemy LMG with its accompanying numbers.

This gallant action of Sep Man Singh at the cost of his own life, which set an example of bravery and devotion to duty, saved a terrible loss of lives to his company and helped in protection of the Poonch Garrison.