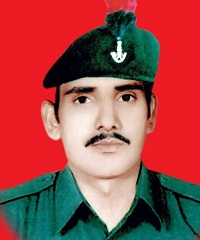 Sep Lahane Vasant Gangaram hailed from Songiri village in Sinnar tehsil of Nasik district in Maharashtra. Son of Shri Gangaram. Sep Lahane Vasant was born on 1st Jun 1959. After his school education, he joined the army at the age of 18 years on 31st Aug 1977. He was recruited into 16 MLI of the Maratha Light Infantry Regiment, an infantry regiment well known for its brave soldiers.  After serving for a few years he got married to Ms. Kamala Bai and they had two daughters Kavita and Usha.

By the year 2017, Sep Lahane Vasant had put in about 12 years of service and had developed into an experienced battle-hardened soldier. During this year’s Sep Lahane participated in various operations including Op Battle Axe in Mizoram (from 1982- 1983), Op Blue Star (1984) and Op Savage (1986-1988). Later in 1989, Sep Lahane was sent to Sri Lanka as part of IPKF operations.

After the induction of Indian forces in Aug 1987, the militants were supposed to surrender but the dreaded LTTE backed out and unleashed war on Indian forces. Initially, only 54 division of the Army was inducted but the escalation of the operations brought three more divisions 3, 4 and 57 into the conflict. By July 1989, Indian forces had undertaken numerous operations against LTTE but the war was far from over.  Sep Lahane ’s unit, 16 MLI, was involved in Operation Pawan and was tasked for one such operation on 11 Jul 1989.

During the operation, Sep Lahane got seriously injured in the heavy exchange of fire with LTTE militants. He later succumbed to his injuries and was martyred. Sep Lahane was a dedicated and determined soldier who made the supreme sacrifice in the line of his duty.