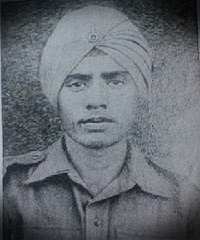 Sepoy Karnail Singh hailing from Samrala, in Ludhiana district of Punjab was born on September 20, 1947. Son of Shri Faqir Singh, Sep Karnail Singh joined the army in 1965, on his birthday on 20 Sep when he was 18 years old.  He was recruited into 8 Sikh Li of the famed Sikh Light Infantry Regiment.

By 1971 war , Sep Karnail Singh had put in 6 years of service in the Army and had grown into a dedicated and committed soldier. During 1971 war his unit was deployed in the western sector in Punjab area.

As the positions were important for the enemy , they launched a determined attack to recapture these positions. During the attack, one enemy medium Machine gun opened up from a well entrenched position on a flank inflicting heavy causalities on our troops. It was very critical to silence the enemy MMG to safeguard the lives of our soldiers defending the positions. In utter disregard of his safety, Sep Karnail Singh charged in to the bunker and succeeded in killing the enemy. However during the process, he was hit by an enemy grenade and was severely injured. He later succumbed to his injuries and was martyred .

Sepoy Karnail Singh was part of a Divisional Commando company during the operations in the Vera- Burj area in the Western sector. The Vera and Burj positions were the scene of bitter fighting. On the 9th December 1971, the Commando company was ordered to reinforce these localities. The enemy launched attack in strength to recapture these positions. During the attack, one enemy medium Machine gun opened up from a well entrenched position on a flank inflicting heavy casualities on our troops. In utter disregard of his safety. Sepoy Karnail Singh charged in to the bunker and succeeded in killing the enemy. In the process, he was fatally wounded by an enemy grenade.

In this action, Sepoy Karnail Singh displayed gallantry of a high order.