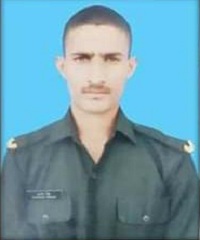 Sep Karnail Singh hailed from Changer Tarsooh village in Bilaspur dist of Himachal Pradesh. After completing his school education, Sep Karnail joined the army in the year-2018 at the age of 20-years. He was recruited into 19th Dogra Bn of the Dogra Regiment, an infantry regiment known for its gallant soldiers and numerous battle honours. After completing his initial training Sep Karnail Singh was posted to the Kashmir valley as his first assignment.

During Feb 2020, Sep Karnail Singh ’s unit 19 Dogra was deployed in J&K. The unit troops besides manning the forward posts in the Gurez Sector of J&K were also engaged in counter-infiltration operations. The posts of the unit were located in high altitude areas with inhospitable terrain and extreme weather conditions. In addition to manning the stationary posts, the unit launched regular armed patrols to monitor the area between the posts. Sep Karnail Singh was part of one such patrol team on 26th Feb 2020.  He was performing patrol duty at about 18000 feet in the area, dotted with dangerous slopes, gorges, and slippery terrain. As Sep Karnail Singh was patrolling along the designated route a sudden avalanche struck the area giving no time for any evasive action.

As a result, Sep Karnail Singh got thrown into a deep gorge and sustained serious injuries.  A rescue operation was launched by the unit which managed to extricate Sep Karnail Singh. He was immediately shifted to  92 Base Hospital in Srinagar for medical treatment. However, he later succumbed to his injuries and was martyred. Sep Karnail Singh was a brave and determined soldier who laid down his life at the age of 22-years in the line of his duty. Sep Karnail Singh is survived by his parents.