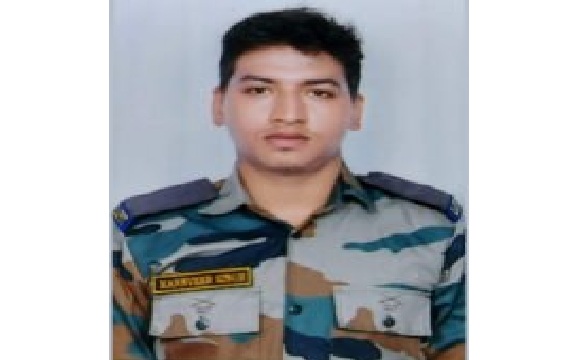 Sepoy Karn Veer Singh hailed from Daldal village in Satna district of Madhya Pradesh. Son of an army veteran Ravi Kumar Singh and Smt Mithilesh Singh, Sep Karn Veer Singh was the younger of two brothers. His early education took place at his aunt's house in Hatia village.  Subsequently, he took admission in Sainik School Rewa and thereafter also studied in Sainik School, Mhow. Right from his younger days, he always wished to follow in the footsteps of his father and don the Army uniform. Following his dream, he joined the army after completing his school education in the year 2017. He was recruited into the 21 Rajput Regiment Battalion of the Rajputana Regiment, an infantry Regiment known for its valour and battle honours in various operations. After serving for sometime with his parent unit, he was deputed to serve with 44 RR battalion, deployed in J&K for counter-insurgency operations.

During Oct 2021, Sep Karn Veer Singh’s unit 44 RR was deployed in the Shopian district of J & K and was involved in operations against the militants on a regular basis. The unit had to maintain a high state of alert at all times as the soldiers were invariably tasked to undertake operations at very short notice. On 20 Oct 2021, the security forces received specific information about the movement of two unidentified terrorists in a village in Shopian district, falling in the AOR(Area of Responsibility) of the Unit.  It was decided to lay an ambush to neutralize the terrorists. As planned Sep Karn Veer and his comrades of 44 RR battalion reached the suspected area in the morning of 20 Oct 2021. Sepoy Karn Veer Singh was functioning as a scout of the team, which had laid the ambush.

Based on specific HUMINT regarding movement of two unidentified terrorists in a village in Shopian district (Jammu and Kashmir) an ambush was laid on 20 October 2021. Sepoy Karn Veer Singh was scout of the team which had laid the ambush.

At 1030 hours, when intercepted by the ambush, both the terrorists in an attempt to escape jumped into a nalla. Sepoy Karn Veer Singh foreseeing the contingency of terrorists escape dashed after them alone for 100 meters. Terrorists realizing that they were being chased fired at him indiscriminately and lobbed grenades injuring him. Undaunted by his injuries, Sepoy Karn Veer Singh crawled ahead for 30 meters and accurately engaged the terrorists and pinned them down. Valorous at close range, he eliminated terrorist in an intense firefight. Displaying unprecedented courage and devotion to duty Sepoy Karn Veer Singh continued to engage the second terrorist, injured him before receiving a bullet injury on his head, and laid his life in the line of duty. For eliminating one hardcore terrorist and injuring another one, despite being mortally wounded, Sepoy Karn Veer Singh is recommended for the award of “SHAURYA CHAKRA (POSTHUMOUS)”.