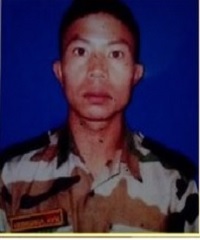 Sepoy Hungnga Konyak hailed from Longching village in Mon district of Nagaland. He had joined Indian army and was serving in 40 Assam Rifles.

On Jun 17, 2018,  a gunfight took place between Assam Rifles personnel & suspected National Socialist Council of Nagaland (NSCN-K) terrorists. An area domination patrol from Aboi Company Operating Base was taken out for an operational task, and after completion of task, while the patrol was returning back to Aboi, at around 3.05 pm, three kms South of Aboi town, the leading vehicle came under IED blast and was fired upon by the terrorists.

Sepoy Hungnga Konyak and his comrades who were part of the team immediately returned fire. The firefight lasted for about 15 minutes. However, taking cover of dense foliage the ultras managed to escape. In the exchange of fire one jawan namely Havildar Fatey Singh Negi was martyred while five jawans got injured and  were evacuated to Jorhat Hospital. Sepoy Hungnga Konyak though was injured very badly in the attack but fought valiantly and gave a stiff resistance. Despite his severe injuries, he refused to be evacuated to hospital and continued to engage the militants. Subsequently, when he was taken to the nearby Jorhat Hospital  he succumbed to his injuries. Sepoy Hungnga Konyak laid down his life in the service of the nation.