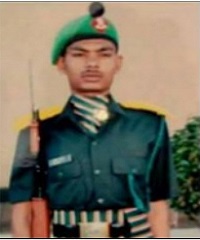 Sep Hasansab belonged to a village in Navalagunda taluk in Dharwad district of Karnataka. Sep Hasansab was serving in a unit deployed in kargil sector of J & K area in 2016. e was recruited into 21 Madras battalion of the Madras Regiment, an infantry Regiment known for its gallant soldiers and numerous battle honours.

During 2016, Sep Hasansab was serving with the unit deployed in Kargil sector of J & K area in 2016. As the unit was located near the LOC, its troops were manning various forward posts in its AOR(Area of Responsibility). Besides manning designated forward posts the unit also operated regular patrols to monitor the gaps between the manned posts. The troops had to exercise extreme caution while paroling as the terrain was very tough with various natural obstacles and also scattered with enemy laid mines or booby traps.

On 29 July 2016, Sep Hasansab, was leading a patrol party that included Sub Basappa Patil too. The patrol party while traversing through the their planned route came under a mine blast. The blast was very severe and the soldiers including Sub Patil and Sep Hasansab suffered serious injuries. They were evacuated for the medical treatment but it did not help Sep Hasansab Khudavand and Sub Basappa Patil later succumbed to their injuries and were martyred. Sep Hasansab was a valiant soldier and a committed junior commissioned officer who laid down his life in the service of the nation.