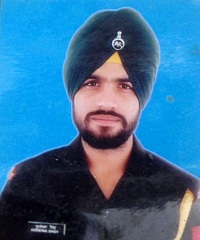 Sepoy Gurusewak Singh was born to the couple Balwinder Singh and Baljit Kaur, in the village Warana in Tarn Taran district of Punjab. Sepoy Gurusewak had two sisters and one elder brother. Sep Gurusewak joined the army in 2013 and recruited into 22 Sikh of the famed Sikh Regiment known for its valiant soldiers and various battle honors.

During 2016, Sepoy Gurusewak Singh’s unit was deployed in the Line of Control in Poonch Sector of J &K.  India shares around 3000 KM border with Pakistan in which 740 Km of LoC falls in Jammu & Kashmir. The LOC is highly active and volatile where cross-border firing occurs very often.

On 6th November the alert and vigilant troops of the Army observed some suspicious movements around midnight and challenged the infiltrating terrorists. The terrorists opened fire and tried sneaking back towards the Pakistan-occupied-Kashmir (PoK) side of LoC. In the ensuing firefight Sepoy Gurusewak Singh and one more soldier  suffered gunshot wound and succumbed to their injuries while being evacuated next day. The 24 years old Sepoy Gurusewak singh laid down his life in the service of the nation.