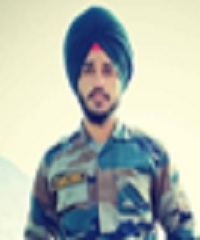 Sepoy Gurtej Singh hailed from Birewala Dogra village in Budladha Tehsil of Mansa district in Punjab. Son of Shri Virsa Singh and Smt Prakash Kaur, Sep Gurtej Singh was born on 15th Nov 1997. Youngest among three siblings, he was inclined to join the Armed Forces right from his childhood. Eventually he joined the Army after completing his school education in 2018 at the age of 20 years. He was recruited into 3 Punjab battalion of the Punjab Regiment, an infantry Regiment of Indian Army well known for its intrepid soldiers and numerous battle & theater honours.

During June 2020, Sep Gurtej Singh’s unit 3 Punjab was deployed in eastern Ladakh close to the Line of Actual Control(LAC). Since early June the tension along the LAC was building up due to construction work in Galwan valley close to the road going from Leh to Daulat Beg Oldie. The Chinese had a serious objection to the construction of a bridge across the Galwan river into the Aksai Chin area. The area held strategic importance to India as well as China as it dominated the road from Leh to Daulat Beg Oldie an airstrip of great military significance to India. There had been many rounds of talks between senior military officials from both sides to diffuse the tensions. On 15/16 June 2020 night, hectic Chinese activities were noticed across the bridge in Galwan valley and the Indian Army decided to take up the matter with Chinese forces to ask them to respect the LAC and adhere to the position as agreed earlier during the talks.

Considering the gravity of the situation, Col Santosh Babu the Commanding Officer of 16 Bihar battalion deployed in the area decided to lead the negotiations. However, an altercation during the discussion raised the tempers leading to a scuffle. Soon the scuffle turned into a violent clash with the Chinese soldiers attacking Col Santosh Babu and his men with deadly clubs and rods. The Indian soldiers were greatly outnumbered and the Chinese soldiers seemed to be prepared for the attack. As the clashes escalated, Sep Gurtej Singh and other soldiers joined the beleaguered Indian troops to take on the Chinese soldiers. As Sep Gurtej Singh reached the place, he was attacked by four Chinese soldiers. However in a rare show of courage and daredevilry he manged to drag all of them and flung them over the cliff. While doing so he too slipped but got saved by a boulder. He then succeeded in pulling himself up using his turban and rejoined the hand to hand combat.

Despite being injured Sep Gurtej Singh snatched a sharp weapon from a Chinese soldier and attacked many more of them. Sep Gurtej Singh was fighting with the Chinese soldiers like a man possessed and managed to kill 11 of them. Eventually he was stabbed form the back but he succeeding in killing him too in his last act of outstanding gallantry. Besides Sep Gurtej Singh and Col Santosh Babu, 18 other soldiers later succumbed to their injuries and were martyred. The other brave hearts included Nb Sub Mandeep Singh, Nb Sub Nanduram Soren, Nb Sub Satnam Singh, Hav Bipul Roy, Hav Sunil Kumar, Hav K Palani, Nk Deepak Kumar, Sep Ganesh Hansda, Sep Chandan Kumar, Sep CK Pradhan, Sep Aman Kumar, Sep Kundan Kumar, Sep Rajesh Orang, Sep Ganesh Ram, Sep KK Ojha, Sep Jai Kishore Singh, Sep Ankush, and Sep Gurbinder Singh.

Sep Gurtej Singh was a valiant and committed soldier, who laid down his life at the age of 23 years in the service of the nation. He is survived by his father Shri Virsa Singh, mother Smt Prakash Kaur and two brothers.