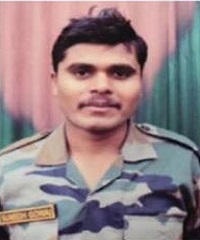 Sepoy Gawai Sumedh Waman hailed from Laonagra village of Akola district in Maharashtra. Born in a poor family, Sep Gawai before joining the Army also worked as a farm laborer to support his parents. He paid his school fees out of his own earning and completed his 12th standard in a school in the neighboring village. He had a strong desire to join the army since his childhood and followed his desire after his school studies.

Sep Gawai Sumedh Waman joined the Army in the year 2011 and was recruited into the Mahar Regiment, a regiment known for its gallant soldiers and numerous battle honours. After serving for a couple of years with his parent unit Sep Gawai was later deputed to serve with 1 Rashtriya Rifles battalion deployed in J & K for counterinsurgency operations.

On 13 Aug 2017, the security forces received information from intelligence sources that 5 to 6 hardcore militants were meeting the top commander of Hizbul Mujahideen in Awneera village in Zainapora area of south Kashmir’s Shopian district. After analysis of the inputs, a decision was taken by the security forces to launch a joint operation to neutralize the terrorists. A joint team comprising elements of 1 RR, and J & K police was formed, which swung into action in the afternoon of 13 Aug 2017 . The team reached the suspected area and commenced the search and cordon operation. Whilst the search operation was underway the terrorists fired at the troops from their hideout triggering a gun battle that continued for several hours.

The assault team continued their operation in a well-coordinated manner plugging all the possible escape routes. As the terrorists were heavily armed and were taking advantage of night conditions, the exchange of fire continued late into the night of 13 Aug 2017. However during the exchange of fire, Sep Gawai Sumedh Waman got severely injured along with five more soldiers and was evacuated to nearby 92 Base Hospital at Srinagar. But Sep Gawai Sumedh Waman later succumbed to his injuries and was martyred.

Sep Gawai was a valiant and dedicated soldier who laid down his life in the service of the nation. Sep Gawai Sumedh Waman is survived by his parents, brother, and sister.