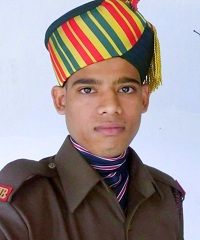 Sepoy Gangadhar Dalui hailed from Jamuna Balia village in West Bengal’s Howrah district. Son of Shri Onkarnath Dalui and Smt Shikha Dalui, Sep Gangadhar was born on 10 Dec 1994. He came from a humble family and worked hard to support his family even while growing up. He was a keen sportsman too and excelled in various games, winning laurels for his school during his student days. Though he was a person of modest means, he offered his help to others whenever he could.
After completing his school, he joined the Army in 2014 at the age of 19 years. He was recruited into 6 Bihar battalion of the Bihar Regiment, an infantry Regiment well known for its fearless soldiers and various battle honours. After completing his initial training, he served in Bangalore and Siliguri before moving to the trouble torn J&K area in 2016.

During Sep 2016, Sep Gangadhar’s unit was deployed in Baramulla district of J&K for counter-insurgency operations. He was one of the 19 soldiers who was martyred in Uri Attack in Sep 2016.  At around 5:30 a.m. on 18 September, four militants attacked an Indian Army brigade headquarters in Uri, near the Line of Control in a pre-dawn ambush. They lobbed 17 grenades in three minutes followed by indiscriminate firing by automatic weapons. As a rear administrative base camp, the HQs had fuel storage facility, which caught fire along with tents with soldiers sleeping in them. As a result of this dastardly attack, 17 army personnel were martyred.

A gun battle ensued that lasted for six hours, during which all the four militants were killed. An additional 19-30 soldiers were also reported to have been injured in the attack. Most of the soldiers martyred were from the 10 Dogra and 6 Bihar regiments. One of the injured soldiers succumbed to his injuries on 19 September at R&R Hospital in New Delhi, followed by another soldier on 24 September, bringing the death toll to 19. The nation will remain grateful to this brave soldier for his courage and supreme sacrifice. Sep Gangadhar Dalui was a gallant and committed soldier who laid down his life in the line of his duty.