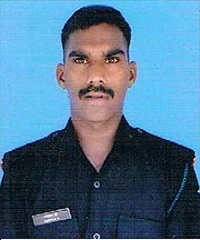 Sepoy Ganesan belonged to Chokkathevanpatti village near Madurai. Ganesan and had joined the military service after completing his class 12. He was inspired by the legendary stories of villagers who had served the Indian Army for many years. Captain Devaraj from his village had attained martyrdom twenty-five years ago while serving in Kashmir and was the inspiration for Ganesan to join the army.

Soldiers face extreme risks in manning the inhospitable terrain at heights of 21,000 feet under extreme weather conditions on the world’s highest battlefield. Avalanches usually take place due to an accumulation of snow and are triggered by morning sunlight. In other cases, when the slope of accumulated snow is between 60 to 80 degrees, the instability leads to an avalanche. Although the Army has a unit of the Snow Avalanche Study Establishment (SASE) in Jammu and Kashmir, with several observatories at various locations to issue warnings and alerts to the Army formations and units, it could not detect this avalanche and the cause also could not be known.

The teams of Army and the Air Force undertook massive rescue operations under extreme weather conditions but could not save the life of this brave soldier. The nation will remain grateful to him for his courage and supreme sacrifice. He is survived by his father Ganapathi and mother Ranjitham.