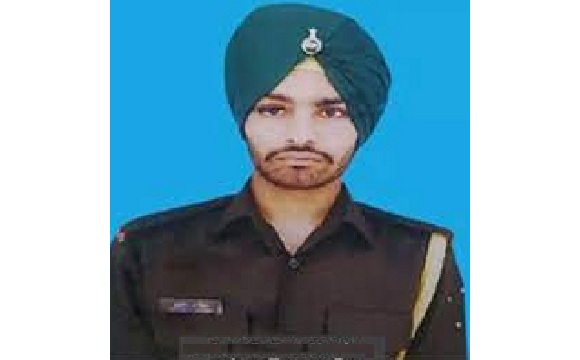 Sepoy Gajjan Singh hailed from Panchranda village in Ropar district of Punjab. Son of Shri Charan Singh and Smt Malkeet Kaur, Sep Gajjan Singh was youngest among four brothers. He was fascinated with the army life and nursed a dream of joining the army since his childhood and  joined the army in the year 2012 after completing his school education.

He was recruited into 23 Sikh battalion of the Sikh Regiment, an infantry Regiment well known for its gallant soldiers and various battle honours. After serving for few years, he got married to Ms Harpreet Kaur in Feb 2021. Later he was deputed to serve with 16 RR battalion, deployed in J&K for counter insurgency operations. By 2021, he had put in around nine years of service in the Army and had served in areas with different terrain and operational environments.

During 2021, Sep Gajjan Singh‘s unit 16 RR battalion was deployed in the Poonch sector of J & K along the LOC.  The LOC was highly active and volatile where cease fire violations occurred very often and without any warning. It was also used by the terrorists for infiltration with the connivance of Pakistani security forces. The infiltration by the terrorists was invariably attempted under the cover of artillery fire or with the help of Border Action Team(BAT). Based on the information from the intelligence sources, about the presence of 4-5 hardcore terrorists in Surankote in frontier Jammu district of Poonch, the security forces launched a search and cordon operation on 11 Oct 2021. Sep Gajjan Singh was part of the team that was assigned the task of conducting this operation.

The operation was launched in the early morning of 11 Oct 2021. Though the troops commenced the search and cordon operation initially in the suspected forested Chamrer area of Surankote, it spread to the adjoining Bhangai village of Rajouri district by evening. In the operation in villages close to Dera Ki Gali in Surankote, a fierce gun battle erupted with the terrorists, who felt threatened with the advancing troops. During the heavy exchange of fire, Sep Gajjan Singh and four other soldiers received gun shots and got severely injured. They later succumbed to their injuries and were martyred. Besides Sep Gajjan Singh the martyred soldiers included Nb Sub Jaswinder Singh, Naik Mandeep Singh, Sep Saraj Singh and Sep Vaisakh H. Sep Gajjan Singh was a valiant soldier, who laid down his life in the service of the nation at the young age of 26 years.
Sep Gajjan Singh is survived by his father Shri Charan Singh, mother Smt Malkeet Kaur, wife Smt Harpreet Kaur, and three younger brothers Shri Harjap singh, Shri Amarjeet Singh & Shri Kamaljit Singh.