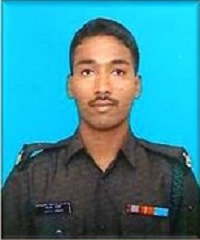 Sepoy Deepak Jagannath Ghadge hailed from Borgoan village in Satara district of Maharashtra. His parents own a small piece of land in the drought-affected Borgoan village in Satara district and had to often work as farm laborers in nearby villages to make their ends meet. Due to extreme poverty, they could not feed and educate their son Deepak and daughter Dipa. Both Deepak and his sister were sent to their maternal uncle R R Jadhav in Vadroshi village which is in Patan block of Satara district. After his formal studies, Sep Deepak Jagannath Ghadge joined the Army and was inducted in 15 Maratha Light Infantry.

On 09 Mar 2017, when Pakistani troops initiated unprovoked firing on Indian posts from across the border in the Poonch sector, Indian troops guarding the LOC had to retaliate strongly and effectively. The forward Indian posts which came under attack were being manned by the troops of 15 Maratha Li. The firing was not only limited to small arms or mortars, but they also used anti-tank guided missiles (ATGMs) in a bunker-busting role. Indian Army gave a befitting reply and a fierce cross border exchange of fire ensued. During this heavy exchange of fire Sep Deepak Jagannath Ghadge, who was on duty on one of the forward posts got seriously wounded. He later succumbed to his injuries and was martyred. Sep Deepak Jagannath Ghadge was a committed soldier who laid down his life in the service of the nation.

Sepoy Deepak Jagannath Ghadge is survived by his wife Nisha, a son and a daughter.

To lift the family from poverty was his dream:-

Colonol R R Jadhav, maternal uncle says about  Deepak, “Born and brought up in a poor family, Sep Deepak Jagannath Ghadge, had been trying to lift his family from that misery. He had been working on his dream to avail comforts and luxuries for his poor parents and to provide a good lifestyle for his wife and two kids. But at the age of 27, he got martyred, leaving behind his parents and family to fend for themselves,”.