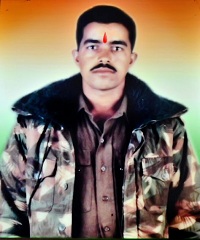 Grenadier Champa Lal Geel hailed from Sanjoo village in Nagaur district of Rajasthan and was born on 2nd Feb 1975. Son of Shri Mukanaram and Smt Mohini Devi, he was the eldest among five siblings. He was inclined to join the Army since his younger days and kept following his dream. He eventually joined the Army after completing his school education from Rajkiya Vidyalaya Sanjoo.

He was recruited in August 1995 at the age of 20 years, into 3 Grenadiers Battalion of the famed Grenadiers Regiment, a Regiment known for its intrepid soldiers and numerous battle exploits. Later he got married to Ms  Indra Devi and the couple was blessed with a son Mahipal. After serving for a few years with his parent unit, he was deputed to serve with 12 RR battalion deployed in J & K for counterinsurgency operations.

During 1998, Gdr Champa Lal was serving with 12 RR battalion deployed in J&K as part of "Op Rakshak" for counter insurgency operations. As the area of his unit’s operation was very volatile and prone to infiltration by militants, the unit had to maintain a strict vigil at all times and deployed armed patrols with regular frequency. Following inputs from the intelligence sources about the presence of some terrorists, the security forces including the troops of 12 RR launched a search operation in Mangat sector on J&K. . Gdr Champa Lal was part of the team that launched the search and destroy operation.

As planned Gdr Champa Lal and other troops reached the suspected area and launched the search operation. On seeing the troops, the terrorists opened fire and a fierce gun battle ensued thereafter lasting several hours. Gdr Champa Lal and his comrades successfully neutralized few terrorists and continued to corner other terrorists. However Gdr Champa Lal received gun shots during the fierce exchange of fire and got severely injured. He later succumbed to his injuries and was martyred. Gdr Champa Lal was a valiant soldier, who laid down his life at the age of 23 years in the line of his duty. Gdr Champa Lal was given the gallantry award “Sena Medal” posthumously for his commendable courage, camaraderie, devotion to duty and supreme sacrifice.