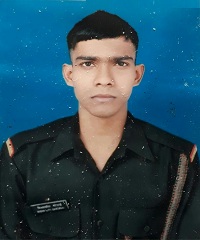 Sepoy Biswajit Ghorai (22) belonged to  Ganga Sagar village in  South 24 Parganas district of  West Bengal. Sep Ghorai belonged to  6 Bihar regiment of the Indian Army and was among the 19 brave hearts who laid down their lives in the line of duty in September 2016 when Pakistani terrorists struck the Army’s Administrative base in Uri sector of J & K. Sep Biswajit, the youngest of two brothers and a sister, had joined the Army 26 months ago. Two of his cousins were in the armed forces and that had inspired him to follow suit. The Ghorai family had mortgaged the little land they had to fund Biswajit’s education and his application for a job in the army. Sep Biswajit was first posted in Bihar and then transferred to J & K at  Uri.

Father Rabindranath Gorai had said proudly, “Martyrs never die. I have lost my son. I don’t know how we will live, but I must say that I am proud. I know he died for the nation”.

Sepoy Biswajit Ghorai is survived by his parents, sister, and brother.