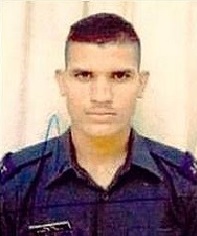 Sepoy Babaloo Singh hailed from Jhandipur village of Mathura district in Uttar Pradesh and was born on 10 July 1987. Son of Shri Maluka and Smt Munni Devi, Sep Babaloo Singh had four other siblings with three brothers Shri Nirbhay Singh, Shri Hari Om Singh & Choudhary Satish Singh and sister Smt Anjana Devi. He completed his initial education from Deen Public School and later finished his class IX and X from Jawahar Inter College. Later after completing his class XII from Seth Prem Sukhdas Bhagat Inter College, he joined the army at the age of 18 years in 2005. He was recruited into 18 Jat battalion of the Jat Regiment, an infantry Regiment well known for its gallant soldiers and numerous battle honours.

After completing his training Sep Babaloo Singh served in areas of different terrain and operational environment including the trouble torn areas of Assam and J&K. He participated in various important operations that included Op Rhino in Assam, Op Rakshak in J&K and Op Alert in Sikkim. By 2016, he had put in about 11 years of service and evolved into a committed and battle-hardened soldier. During 2016, he was serving with 61 RR unit on deputation, which was engaged in anti-insurgency operations in J & K.

During 2016, Sep Babaloo Singh was serving with 61 Rashtriya Riffles battalion, which was engaged in anti-militancy operations in militant-infested areas of J & K. On the night of 29/30 July 2016, there was an attempt to sneak into the valley by the militants in the Nowgam sector about 120 km from Srinagar. The troops of 61 RR were already alert as the intelligence reports had informed about such possible attempts along the LOC. At about 0030 hrs on 30 July 2016, Sep Babaloo Singh’s comrades Naik Bijendra Singh and Sep Vishal Choudhary, who were patrolling along the anti-infiltration obstacle system, were fired upon by the militants. As a result Sep Babaloo Singh and Naik Rakendra Singh were rushed as reinforcement to the ambush area.

Meanwhile one terrorist got into the cover and hid behind the boulders. However as the gun battle was in progress, Sep Babaloo Singh came face to face with the second terrorist who fired at him from a distance of about 15 meters. Though wounded seriously, Sep Babaloo Singh displaying courage and gallantry of a very high order, retaliated and killed the terrorist thus eliminating the threat to his other comrades. He later succumbed to his injuries and was martyred. Sep Babaloo Singh was a valiant and committed soldier who laid down his life at the age of 29 years in the line of his duty. He was given the gallantry award, “Sena Medal” for his commendable bravery, devotion to duty, camaraderie and supreme sacrifice.

Smt Ravita Devi, wife of Sep Babaloo Singh paid tribute to her husband on his “Day of Martyrdom” on 30 July 2018...

I felt indeed proud of you when I heard that a public function was being held in the town to commemorate your martyrdom and remember your sacrifice. Consumed by your thoughts, I instinctively had moved towards the venue with your gallantry award in my hand. Amidst the applause and appreciation of the people I really felt like a “Veer Naari”.

But sometimes I feel that though I was the wife of a “Veer Purush”, I am still struggling to play the role of a “Veer Naari” as expected of me. I often get terrified by your absence and a future without you. Many a time I become speechless when children ask for you and ask questions for which I have no answers. I am still unable to accept the fact that you will never return and will never be there by my side. I still remember that fateful day when I was waiting to hear from you and instead you arrived wrapped in tricolor. That time, I had suddenly felt the pain that you would have gone through after taking in those bullets. I can still feel that pain many times even now.

But you also had taught me to be strong and be a proud soldier’s wife. You are not there but your words continue to inspire and encourage me to tide over the problems of life. When you were around, I was the ‘daughter in law’ of the house but now I play the role of the ‘son’ of the house, deriving strength from your words and gallant deeds. As you would have liked to see, I will also ensure that our son, Drona too follows into your footsteps and dons the “Army Uniform” that you loved so much.

I know that you are watching from above and guiding me to live life like a true “Veer Naari”.