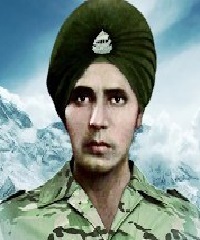 Sepoy Harbhajan Singh was born on 30th August 1946 in village Sadrana of Gujjarawala District in Punjab (Pakistan). Son of Mrs Amar Kaur, Sep Harbhajan Singh joined the Army on 12 February 1966, and was recruited into 24 Punjab of the famed Punjab Regiment. It was with this regiment that he served until his death on 4 October 1968 in Sikkim.

In 1968  the states of Sikkim and North Bengal were under the rage of great natural catastrophic where landslides, floods and heavy rain had taken thousands of lives across the two states. On October 4, 1968 Sepoy Harbhajan Singh was escorting a mule caravan from his battalion headquarters in Tekula to Dengchukla. As the caravan was on its way, Sep Harbhajan Singh fell into a fast flowing stream and was drowned.

A massive search for Sep Harbhajan Singh did not yield any result and he was declared a deserter by the Army authorities. However it is believed that his comrade Pritam Singh had a dream of Harbhajan Singh informing him about his tragic incident and also the location of his dead body. The body of Sep Harbhajan Singh was recovered from the same location as divulged in the dream of his fellow soldier.

Indian army has given him honourary captain’s rank posthumously. It is believed by the soldiers posted around Nathu la that Sepoy Harbhajan Singh’s soul is protecting and forewarning them of danger in that area. A temple also has been constructed in his name where thousands of people visit to pay their respects to Sep Harbhajan Singh now known as Baba  Harbhajan Singh.

Sepoy Harbhajan Singh of the 23rd Battalion of the Punjab Regiment resides in a small cluster of buildings set in a breathtakingly beautiful valley, a short way from Sikkim’s famed Nathula pass. The dutiful soldier takes two months off a year to visit his parents in Kuke village in Punjab’s Kapurthala district. Sounds like a regular army guy. Except that he died in 1968 after drowning in a fast flowing stream while escorting a mule column in Sikkim. His body was found after a three-day search and cremated.

Baba Harbhajan Singh warns the dangerous activities on the border through the dreams of fellow army men. Even Chinese army men believe to have seen a human figure doing patrolling in the night across the border. Baba Harbhajan Singh has been honoured with the rank of Honorary Captain and his samadhi reconstructed at the junction of Kupup Gnathang road and the pathway leading to Menmoichu Lake as apart of the watershed memorial complex. Over the years the shrine of Baba Harbhajan has gained huge following across all frontiers. Baba is respected and worshiped by every army soldiers in Sikkim. They believe Baba would forecast accident in the valley much ahead of the happening.

Baba Mandir has three room structures. The central room has a large portrait of the Baba along with other Hindu deity and Sikh Gurus. To the right of the central room is the personal room of Baba. The room has every household belongings required for daily activities, from clothes, shoes, slippers and a neat sleeping bed, it is all well maintained. The uniforms are neatly ironed and shoes polished ready for use. Opposite to this room is a small room that has an office cum store room. The room is filled with water bottles, unused slippers, tooth brushes and other items offered to Baba. The followers believe that the water kept in the Mandir after a week would turn into holy water and cure every ailment. People believe that the slippers kept here would help patients with gout and other foot problems and so on. That devotee who cannot visit the shrine sends letters to Baba that is opened by the associate of Baba. These letters usually have the request for the Baba to help solve personal problems and the gratitude for being helped.

Every October 4 a special ceremony is organized by the Indian army out here to honour the role of Baba Harbhajan Singh as well as the martyrs of Indian army who laid down their lives for safeguarding the country. Every Sunday and Tuesday throughout the year puja is offered at Baba Mandir where free meals are distributed among the devotees.

Despite the blessing of the Baba the armies at Nathula border are in high alert when Baba goes on an annual leave from September 15 to November 15 every year. Even leaves for other army men during the months are cancelled and extra cautions are sought after.

This true legend of Baba Harbhajan is only next to the significance of Lord Kanchenjunga for the people of Sikkim.