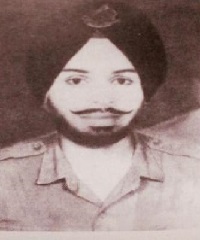 Sepoy Avtar Singh was born on 14 January 1945 and hailed from Moga district of Punjab. Son of Shri Mehar Singh and Smt Jasmer Kaur, Sep Avtar Singh joined the Army at the age of 18 years on 14 June 1963. He was recruited into 21 Punjab battalion of the Punjab Regiment, an Regiment, an infantry Regiment well known for its fearless soldiers and numerous battle exploits. By the year 1971, Sep Avtar Singh had put in around 8 years of service and operated in various field areas. As the war with Pakistan became imminent in the late 1971, Sep Avtar Singh's unit got deployed in its operational location on the western border.

On December 3, when the war started, Pakistan attempted to occupy the Krishna Ghati sector of Poonch district in Jammu region, where 21 Punjab battalion was stationed. But the soldiers of 21 Punjab foiled the attempts and repulsed the enemy attack. The Pakistani soldiers also attacked the Nangi Tekri post in the same sector on the night of December 10, 1971.  In the counter attack on the night of 10th/11th December, 1971, Sep Avtar Singh formed part of a force attacking the right shoulder of Nangi Tekri. It was a well-fortified position held in strength by  the enemy.

Sep Avtar Singh and his comrades continued to advance despite being subjected to intense artillery and medium machine-gun fire. However Sep Avtar Singh took a direct hit and as a result lost one of  his legs. He noticed that one of the MMG post was wrecking havoc and impeding their advance. Realizing the gravity of the situation, Sep Avtar Singh realized that the MMG post had to be neutralized at any cost. Displaying raw courage, he crawled up to the medium machine-gun post through the enemy fire in a bid to destroy it. However while hurling himself at the medium machine gun, he was hit by a burst of automatic fire and got severely injured. He later succumbed to his injuries and was martyred. Sep Avtar Singh was a gallant and committed soldier who laid down his life at the age of 26 years in the line of his duty.

Sepoy Avtar Singh was given the gallantry award, "Vir Chakra" for his commendable bravery, determination, devotion to duty and supreme sacrifice.

On the night of 10th/11th December, 1987, Sepoy Avtar Singh of a  battalion of the Punjab Regiment formed part of a force attacking the Right shoulder of Nangi Tekri in the Jammu and Kashmir sector. This was a well-fortified position held in strength by  the enemy.  During the attack, the assaulting troops were subjected to intense artillery and medium machine-gun fire as a result of which Sepoy Avtar Singh lost one of  his legs. Undaunted, he crawled up to a  medium machine-gun post in a bid to destroy it  and while hurling himself at the medium machine gun, he was hit by a burst of automatic fire as a result of which he died.

In this action, Sepoy Avtar Singh displayed gallantry and determination of a high order.