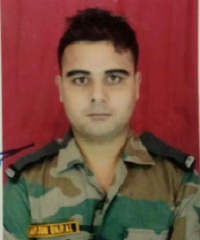 Sepoy Arjun Baral hailed from Koubru Leikha Village of Kangpokpi district in Manipur. Son of Shri Tankanath Baral, Sep Arjun Baral had joined the Territorial Army and was serving with 165 TA battalion that functioned under the operational command of Assam Rifles.

During May 2017, Sep Arjun Baral’s unit 195 TA Bn was functioning under the operational command of Assam Rifles and was engaged in the counter insurgency operations in Manipur. The insurgents belonging to UNLF(United National Liberation Front) were regularly indulging in anti national activities and resorting to violence against the security forces on a regular basis. Consequently the troops had to maintain a high level of alert at all times and had to be ready for counter-insurgency operations at a very short notice. The movement of troops by road entailed high risk as most of the roads passed through thick vegetation and inaccessible areas. Sep Arjun Baral along with Naik Varesho Hungyo and their other comrades were tasked for an operation on 08 May 2017 and had to move by road to an operational location in Lokchoa area in Tengnoupal District.

At around 0530 hrs on 08 May as the vehicle carrying the troops reached Moreh, close to the Indo-Myanmar border, the suspected insurgents from MPA(Manipur People’s Army), the armed wing of UNLF triggered an IED blast. The blast was very powerful which smashed the front glass shield of the vehicle and flattened both the front tyres. Sep Arjun Baral, Naik Varesho Hungyo and two more soldiers got seriously injured and were shifted to the nearby hospitals. Sep Arjun Baral was shifted to the Military Hospital Leimakhong but he succumbed to his injuries and was martyred. Sep Arjun Baral was a dedicated and disciplined soldier who laid down his life in the line of his duty.