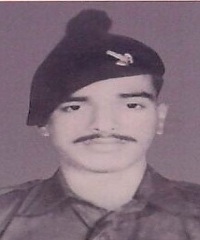 Sepoy Anil Kumar Kadam was born on 11th May 1949, in Sarambal village in Kudal Tehsil of Sindhudurg district in Maharashtra. Son of Sri Yashwant Kadam and Smt Kusum Kadam, Sep Anil Kumar grew up in his village but later his family moved to Mumbai and settled there. Sep Anil Kumar Kadam was fascinated with the Army life since his childhood and always nursed the idea of joining the Armed Forces. His parents provided voluntary help at the Naval Hospital, INHS Asvini , Colaba in Mumbai and supported their son in pursuing his dream.

Sep Anil Kumar Kadam joined the Army after his education and was recruited into 5 Maratha Li of the famed Maratha Light Infantry Regiment, a regiment known for its gallant soldiers and numerous battle honours in various operations. As the tensions escalated on the eastern border with then East Pakistan Sep Anil Kumar’s unit got deployed there in the early part of 1971.

1971, Indo-Pak war officially commenced on 03 Dec 1971, when the Pakistani Air Force attacked 11 Indian Air Fields, but the border skirmishes had started months before that when the refugees from across the border had started pouring in as a result of atrocities committed by the Pakistani forces.  Prior to the outbreak of open hostilities, 5 Maratha LI had been engaged in a number of encounters during aggressive patrolling that had been undertaken. Sep Anil Kumar Kadam was part of numerous operations and had proved his mettle as a valiant and determined soldier.  At the onset of war, the battalion under the command of Lt Col J P Torpy, went into action spearheading the advance along the railway line from Andalbaria towards Safdarpur. A strong Pakistani position at Suadih that was contacted at first light on 4 December 1971, was overcome by 1900 hours with determined attacks in phases during the day, led by the initial attack launched by B Company under Maj P K Chatterjee who led the assault with the stirring war cry of the Marathas.

The ‘hand-to-hand’ fighting that ensued left 28 enemy soldiers dead in the trenches and four in the open, with B Company suffering six killed in action and 16 wounded. The remaining positions at Suadih were overcome without much resistance. Soon thereafter, the battalion was ordered to move for assistance in the capture of the Safdarpur railway bridge. Attacks that were launched under cover of artillery fire revealed that the enemy had abandoned the positions and fled. By 0100 hours on 5 December, Safdarpur had been taken and once again Sep Anil Kumar Kadam and his comrades displayed grit and determination during the operation.

After the capture of Safdarpur railway bridge as the enemy was pulling out from their positions, an attack was launched to capture Elangi, but it had been abandoned. But soon thereafter, tragedy struck when the Pakistanis subjected the position to heavy artillery fire including air bursts. The attack took the troops by surprise and Sep Anil Kumar Kadam along with nine other soldiers got severely injured. Sep Anil Kumar Kadam later succumbed to his injuries and was martyred at the age of 22 years. Sep Anil Kumar Kadam was a gallant and committed soldier who laid down his life in the service of the nation.

” They shall grow not old, as we that are left grow old: Age shall not weary them, nor the years condemn. At the going down of the sun and in the morning, We will remember them. “

Tribute by his nephew, Dhananjay Kadam:

” Sepoy Anil kumar Kadam has been an inspiration for the entire Kadam family and will be an inspiration for generations to come. He was  a multi-faceted personality. When he was martyred, his body was never returned and his mother never believed that he was gone. She used to scour the newspapers hoping to see his name in the list of rescued prisoners of war. A mother who missed her son dearly, would hear him walking in his military boots. After all, he was just 22 and the eldest son. Though the newer generation in our family has never seen him in person, his actions, courage and the ultimate sacrifice has impressed us and influenced positive actions in our life. The onus is on upon all of us to ensure that his martyrdom does not go in vain.”