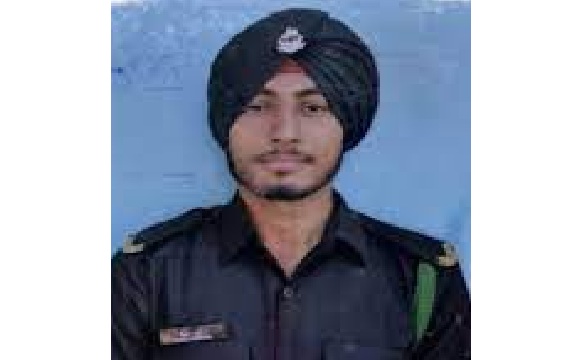 Sepoy Amardeep Singh hailed from Karamgarh village in Barnala district of Punjab. Son of Shri Manjeet Singh, Sep Amardeep Singh joined the Army after completing his school education on 22 Dec 2018 at the age of 20 years. He was recruited into 21 Punjab battalion of the Punjab Regiment, an infantry Regiment of Indian Army well known for its intrepid soldiers and numerous battle & theater honours.

During April 2021, Sep Amardeep Singh’s unit 21 Punjab was deployed in the southern sector of the Siachen glacier in Ladakh. This sector was one of the most remote parts of the glacier and remained inaccessible during winter. The troops besides manning designated posts also operated regular patrols to monitor the area along the border. Sep Amardeep Singh along with few other soldiers was on one such patrol on 25 Apr 2021. While the patrol team was traversing through the snow-clad terrain in sub-sector Haneef in southern Glacier area, a horrific avalanche struck them, giving very little time to take any action. The soldiers faced extreme risks in manning the inhospitable terrain at heights over 19,000 feet under extreme weather conditions on the world’s highest battlefield. Avalanches usually took place due to the accumulation of snow and were triggered by morning sunlight. In other cases, when the slope of accumulated snow was between 60 to 80 degrees, the instability led to an avalanche. Although the Army had a unit of the Snow Avalanche Study Establishment (SASE) in Jammu and Kashmir, with several observatories at various locations to issue warnings and alerts to the Army formations and units, it could not detect this avalanche.

The rescue operation was launched by the army with a team equipped with specialized types of equipment. However, the soldiers had got buried under tons of snow and it was very difficult to locate them. Despite the herculean efforts, Sep Amardeep Singh and Sep Parabjeet Singh of the unit could not be saved, owing to their prolonged exposure to extreme cold conditions. Sep Amardeep Singh was a brave and dedicated soldier who laid down his life at the age of 23 years in the line of his duty.