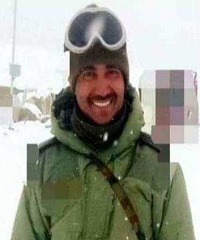 Sepoy Suresh Chitte hailed from Alamalla village in Ausa tehsil of Latur district in Maharashtra. Son of  Late Gorakh Chitte and Smt. Sushila Bai, Sep Suresh was second among four siblings and was inclined to join the armed forces since his childhood. He did his school from Ramnath High-School at his native place and joined the army in the year-2004 at the age of 17-years. he was recruited into 1 Mahar Battalion of the Mahar Regiment, an infantry regiment founded in 1941 and has a glorious history of gallantry in various operations.

Sep Suresh had lost his father at an early age and his mother Smt. Sushila Bai, who was a farm laborer brought up her children single-handedly. Coming from a humble background, Sep Suresh understood his responsibility quite early in life and shouldered it as much as he could. Besides being a tough soldier he also had a compassionate heart and was associated with a school for underprivileged children in his village. During his visit to the family on the occasion of Diwali in 2019, Sep Suresh had also promised his mother to construct a house for the family. Sep Suresh in the year 2014 got married to Ms.Shubhangi  and the couple had two daughters Tanuja & Anuja and son Adarsh.

During 2003, Sep Suresh was serving with his unit that was deployed at the Siachen area. The unit was deployed in Saltoro ridge in Siachen glacier in the Ladakh region. Siachen about 75 km in length is the second longest glacier in the world and is known as the world’s highest battleground, situated at an altitude of 5,700 meters. The extremely low temperatures – which can drop to minus 60 degrees Celsius during winter – has claimed hundreds of lives since 1984, when India and Pakistan stationed their troops on the Glacier. The soldiers at the Saltoro ridge located about 20 km southwest of Siachen have to fight not only the treacherous enemy but the extreme hostile weather too on a daily basis.

On 13th Jan 2020, Sep Suresh was on a patrol duty traversing through harsh icy terrain when he became a victim of unforgiving weather conditions. Due to prolonged exposure to extreme weather conditions and lack of oxygen at the high altitude, Sep Suresh developed severe respiratory problems. Sep Suresh was airlifted to the army hospital at Leh, but his medical condition deteriorated very fast. Despite fighting bravely, he lost the battle for life and was martyred. Sep Suresh was a gallant and dedicated soldier who laid down his life at the age of 32 years, in the line of his duty.