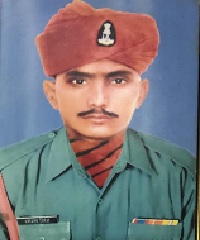 Place of Birth : Mathura, U P

Sepoy Soran Singh Kuntal was born on 22nd Feb 1971 and hailed from Nagariya village in Goverdhan Tehsil in Mathura district of Uttar Pradesh, Son of Shri Arjun Singh Kuntal and Smt Veermati Devi, Sep Soran Singh had inclination towards the Armed Forces since his younger days. After completing his PUC II year,  he joined the Army in 1990 at the age of 19 years. He was enrolled into 4 Jat of the Jat Regiment, an infantry Regiment known for its brave soldiers and numerous battle honours.

Sep Soran Singh got married to Kamlesh Devi in April 1992, and the couple had two sons and a daughter. By 1999, Sep Soran Singh had put in around 9 years of service and developed into a tough and dedicated infantry soldier.

During the Kargil war, Sep Soran Singh Kuntal’s unit 4 Jat was deployed in Kaksar Sector along the LOC. The terrain in the Kaksar area was generally glaciated with with heights ranging more than 15000 feet. The main ridge in the area comprised of Point 5608, Point 5605 and Point 5280 Spur junction and the approach to the main ridge was very difficult. 4 Jat battalion was functioning under the control of 121(I) Brigade along with JAK Rifles which was placed under the Brigade on 28 May 1999. The operational plan was to evict the enemy forces and recapture Point 5608, Point 5605 and Point 5280 Spur junction  on the main ridge line.

The razor sharp ridge-lines in the Kaksar sector, located at an average height of 17,500 feet were very challenging to build up logistics for launching the offense. The preliminary operations were planned to be launched on 28 June 1999. As part of preparation for the launch of operations on 28 June, a number of reconnaissance patrols were planned to assess the situation. Sep Soran Singh was part of one such patrol on 21 Jun 1999. The patrol team had to traverse through dangerous terrain with hostile weather conditions and lurking enemy soldiers. However the movement of the patrol was noticed by the enemy and it came under intense fire. Sep Soran Singh got injured severely during the ensuing exchange of fire. He later succumbed to his injuries and was martyred. Sep Soran Singh was a gallant and committed soldier who laid down his life at the age of 28 years in the service of the nation.