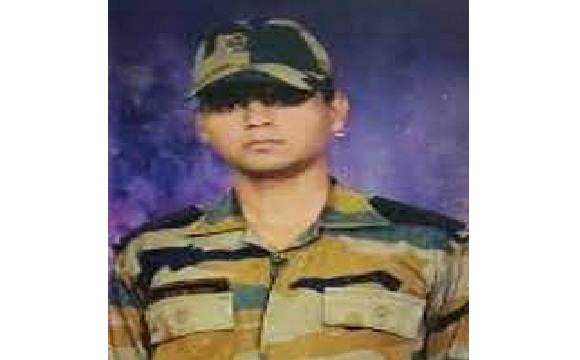 Place of birth : Bareilly , UP

Sepoy Saurabh Rana hailed from Bareilly in Uttar Pradesh and was born in the year 1990. Son of an army veteran Rajkumar Rana who retired from the army as a Captain and Smt Kusum Devi, he had a younger brother Rahul as his sibling. Sep Saurabh Rana always wished to follow into the footsteps of his father and don the Army uniform. Following his dream, he eventually joined the Army after completing his education in the year 2014 at the age of 24 years.

He was recruited into the 9 Rajput battalion of the Rajput Regiment, an infantry Regiment well known for its fearless soldiers. After serving for a few years he got married to Ms sandhya and the couple was blessed with two sons Rupesh and Harsh. By 2022, he had completed around eight years of service and developed into a tough and devoted soldier.

During Apr 2022, Sep Saurabh Rana’s unit 9 Rajput was deployed in J&K. The unit troops besides manning the forward posts in the Gurez Sector of J&K were also engaged in counter-infiltration operations along the LOC. The LOC in that sector was very volatile and active where the enemy forces often resorted to unprovoked firing. Besides manning various posts, the area was monitored and guarded by the security forces by employing armed patrols on a continuous basis. On 17th Apr 2022, Pakistani forces indulged in ceasefire violation and resorted to unprovoked firing. It was probably an attempt to provide cover fire to infiltrators sneaking from across the border. On that day, Sep Saurabh Rana and his comrades were manning the forward posts in the Gurez sector along the LOC. Indian army initiated a befitting reply resulting in a prolonged cross-border exchange of fire.

However, during the exchange of fire, Sep Saurabh Rana got seriously injured. He later succumbed to his injuries and was martyred. Sep Saurabh Rana was a valiant soldier who laid down his life in the line of his duty following the highest traditions of the Indian army. Sep Saurabh Rana is survived by his father Capt Rajkumar Rana (Retd), mother Smt Kusum Devi, wife Smt Sandhya, sons Rupesh & Harsh, and brother Shri Rahul Rana.