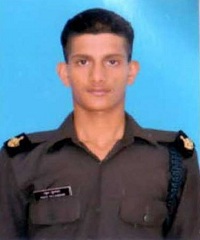 Sep Rahul Bhairu Sulagekar hailed from Uchagaon village in Belagavi tehsil of Karnataka. Son of Shri Bhairu Sulagekar and Smt Geetha, Sep Rahul studied from MLA RC college Bangalore and joined the army. He was recruited into 4 MLI of the Maratha Light Infantry Regiment, an infantry regiment well known for its gallant soldiers.

During Nov 2019, Sep Rahul’s unit 4 MLI was deployed in the Poonch sector of J&K. The unit troops were manning the forward posts in the Krishna Ghati sector along the LOC. The Area of Operation (AOR) was very volatile wherein the Pakistani forces often resorted to unprovoked firing from across the border. The purpose of the unprovoked firing was invariably to provide cover fire to infiltrating terrorists. One such attempt was made in the early hours of 8th Nov 2019 in the Krishna Ghati sector. The troops at the forward post observed the suspicious movement of the terrorists at around 2:30 am. The movement was accompanied by the cover fire from across the border. Sep Rahul was manning one of the forward posts on that day.

Sep Rahul and his comrades swung into action on detecting the suspecious movement. The accompany cover fire confirmed the infiltration attempt and soon the troops made contact with the infiltrators. A fierce gun battle followed thereafter to foil the infiltration attempt. However during the exchange of fire Sep Rahul  sustained gunshot wounds and was evacuated to the nearby medical aid center. Sep Rahul however succumbed to his injuries and was martyred. Sep Rahul  was a valiant and dedicated soldier who laid down his life at the age of 22 years  in the service of the nation.