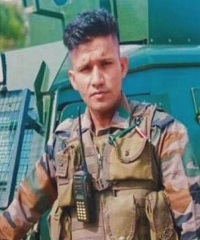 Sepoy Prashant Sharma hailed from Khanjapur village in Muzaffarnagar district of Uttar Pradesh. Son of an army veteran Naik Sheeshpal Sharma, Sep Prashant Sharma had an elder sister Priya and a younger brother Nishant as siblings. He was inclined to serve in the Army like his father since his younger days. He eventually joined the Army after completing his school education on 21 Nov 2016 at the age of 19 years. He was recruited into 26 Mech Inf of the Mechanized Infantry Regiment, one of the youngest Regiments of Indian Army, formed after the 1965 Indo-Pak war to provide greater mobility to the Infantry.

Sep Prashant Sharma besides being a committed soldier was a keen sportsman and excelled in various field games. He had special interest in cycling and had a dream of representing the country in cycling at international level. He would practice cycling regularly wherever and whenever possible and had purchased a cycle worth Rs 2.5 Lacs out of his savings. After serving for a couple of years with his parent unit, Sep Prashant Sharma was deputed to serve with 50 RR battalion deployed in J&K for counter-insurgency operations. He was planning to get married soon and his wedding was fixed for 06 Dec 2020, but the destiny had something else in store for him.

During Aug 2020, Sep Prashant Sharma’s unit 50 RR was deployed in Pulwama district of J&K. The unit troops were engaged in counter-insurgency operations on a regular basis as its AOR (Area of Operation) was affected by active militancy. Based on the information form the intelligence sources, an operation was planned in Zadoora village in Pulwama district to neutralize a group of terrorists, who were suspected to have taken shelter there. Consequently a joint operation was launched on 29 Aug 2020 by 50 RR along with the elements of CRPF and J&K Police. Sep Prashant Sharma was part of 50 RR team that reached the suspected area as planned and launched the search and cordon operation.

Sep Prashant Sharma was in the lead element of his party when it came into contact with the terrorists during the search operation in Zadoora village. A fierce gun battle followed thereafter with heavy exchange of fire.The assault team manged to eliminate three terrorists in the firefight, however Sep Prashant Sharma sustained multiple gunshot wounds during the operation. Despite being grievously injured, he continued to fight till he collapsed. He was subsequently evacuated to 92 Base Hospital, Srinagar where he eventually succumbed to his injuries and was martyred. Sep Prashant Sharma was a gallant and dedicated soldier, who laid down his life at the age of 23 years in the line of his duty.