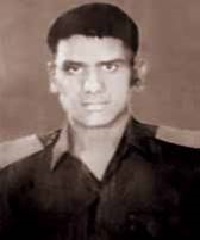 Sepoy Prabhakar Bayaji Patre was born on 1st Jun 1967 and hailed from Wagdari village in Solapur district of Maharashtra. Son of Shri Bayaji and Smt Laxmi Bai, Sep Prabhakar Bayaji Patre completed his studies from Vidyavardhak Shelke Patshala, Wagdari village in Solapur. After completing his school education, he joined the army at the age of 19 years on 21st July 1986. He was recruited into 8 Mahar battalion of the Mahar Regiment, an infantry regiment well known for its gallant soldiers and numerous battle honours.

By Oct 1987, Sepoy Prabhakar Bayaji Patre’s unit was operating deep inside Sri Lanka and was in thick of combat operations. As the battle for Jaffna progressed, the IPKF advance came under intense and vicious opposition from the LTTE Tigers. Fighting in built-up and an as-yet unevacuated Jaffna, the Indian High Command insisted that the slow advance was, in addition to Tiger resistance, more a result of reluctance on the part of the IPKF to use heavy weaponry to clear LTTE defenses. On October 15/16 the IPKF stopped its advance to stabilize the front. Palay, the major operations headquarters for the 54th Infantry Division, was also secured from Tiger attacks. At this time the IAF undertook a massive airlift to reinforce the 91st with three brigades and heavy equipment, including T-72 tanks. Now reinforced, the IPKF resumed the battle for Jaffna on 16 Oct.  On 16 Oct 1987, Sep Prabhakar Bayaji Patre’s unit was tasked to link with Jaffna fort.

However during their advance from road Junction for linking up with the Jaffna Fort, the troops came under heavy militant fire from Manippe. The whole battalion was pinned down and in such conditions,  Sep Prabhakar Bayaji Patre come forward to carry ammunition as part of the  ‘Suicide squad’ to a company. En-route the squad was ambushed by the militants,  but Sep Patre fought fearlessly and refused to give up. On reaching the company location, Sep Patre and his comrades had to make a fighting break in, since the company was surrounded. Sep Patre took the lead and was the first to break the cordon. Without caring for his own safety, Sep Patre ran spraying bullets all over to break the cordon. However while doing so, he received multiple gun shots in his chest but kept advancing till he reached the company. His charge broke the cordon for the remaining soldiers. But Sep Patre eventually succumbed to his injuries and was martyred.

While deployed in Sri Lanka as part of the Indian Peace Keeping Force, Sepoy Prabhakar Bayaji Patre volunteered to carry ammunition as part of the  ‘Suicide squad’ to a company on 16th October, 1987. Enroute the squad was ambushed by the militants time and again but Sepoy Bayaji was fearless in breaking these. In the process he got injured, but refused to give up. On reaching the company location, the squad had to make a fighting break in, since the company was surrounded. Sepoy Bayaji was the first to break the cordon. He ran spraying bullets all over. He received a burst in his chest but kept on advancing till he reached the company. His charge broke the cordon for the remaining squad. But this brave soldier succumbed to his injuries having accomplished his task.

Sepoy Prabhakar Bayaji Patre thus displayed conspicuous courage and valour in the face of the militants.