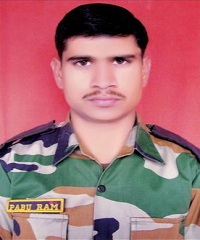 Sep Pabu Ram Thori hailed from Salwa Kalan village in Jodhpur district of Rajasthan and was born on 7th Jun 1990. Son of a farmer Shri Bhoma Ram Thori and Smt Luni Devi, Sep Pabu Ram had two brothers, Shri Bhanwar Lal & Shri Dhanaram and two sisters Smt Baby & Smt Munni. Sep Pabu Ram completed his school education from his village Salwa Kalan and subsequently joined the army. He joined the army on 25th Jun 2010 at the age of 20 years. He was recruited into 17 Rajput battalion of the Rajput Regiment, an infantry regiment known for its gallant soldiers and various battle honours.

During 2015, Sep Pabu Ram was serving with 44 RR battalion deployed in Shopian district of J&K. The AOR (Area of Responsibility) of the battalion was affected by terrorists activities and consequently, the unit was regularly engaged in various operations against the terrorists. On 11th Aug 2015 Sep Pabu Ram and his comrades were tasked for an operation in Shopian district. When the troops were on their way for the operation, their vehicle was attacked by the terrorists in a pre-planned operation. The terrorists hiding in safe places attacked the soldiers with automatic weapons firing indiscriminately.

Though the attack was sudden, Sep Pabu Ram and his team members rose to the occasion and quickly organized themselves to retaliate. Sep Pabu Ram and his comrades counter-attacked with determination to give a be-fitting reply to the terrorists. However, in the ensuing gun battle, Sep Pabu Ram received multiple gunshots including three in his chest & two in the neck. Sep Pabu Ram collapsed with serious injuries and was evacuated to the near by military hospital. Later he was airlifted and transferred to Delhi’s RR hospital. He battled for life for next few days but later succumbed to his injuries on 18th Aug 2015 and was martyred.