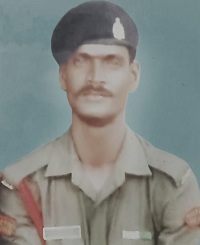 Sepoy Muniappan hailed from Bangalore district of Karnataka and was born on 25th March 1966. Son of Shri Appavu and Smt Panjasaaram, Sep Muniappan joined the army in the year of 1985 at the age of 19 years. He was recruited on 31 Dec 1985 into the Army Service Corps, the corps which carries out the logistic supply function of the Army.

After serving for few years Sep Muniappan got married to M Devi and the couple had a daughter Vanitha and two sons Manjunath and Vinod Kumar. By 1996, Sep Muniappan  had put in about 9 years of service and had served in various operational areas with different terrain and work environments. After serving with his parent corps Sep Muniappan  got deputed to serve with 16 Rashtriya Rifles battalion, deployed in the North East for counter insurgency operations.

During 1996, Sep Muniappan was serving with 16 RR battalion , deployed at Kohima in Nagaland to tackle anti-national activities by various insurgents group in Nagaland.  Based on the intelligence inputs, 22 RR planned a counter-insurgency operation on 22nd May 1996 in its area of responsibility. Sep Muniappan was part of the team that was assigned the task of neutralizing the threat of the militants. As planned the team swung into action and reached the suspected area.

Soon the team made contact with the militants who opened fire at the troops on being challenged.  A fierce gun-battle followed thereafter with heavy exchange of fire. During the gun battle Sep Muniappan got hit by gunshot in the chest and was severely injured. He later succumbed to his injuries and was martyred. Sep Muniappan was a dedicated and valiant soldier and laid down his life at the age of 30 years in the service of the nation. Sep Muniappan is survived by his wife M Devi, daughter Vanitha and sons Manjunath & Vinod Kumar.