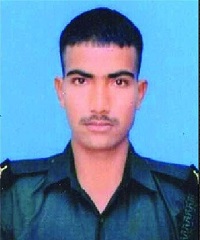 Sepoy Mane Savan Balku hailed from Kolhapur in Maharashtra and was born into a military family. His family had a long tradition of serving in the Armed Forces wherein his father Balku Mane, elder brother Sagar, and brother-in-law also served in the Army. Sep Mane Savan inspired by his father wanted to join the Army since his childhood and followed his ambition after his school.
Sep Mane Savan joined the Army at the age of 20 years and was recruited into 15 MLI of the Maratha Light Infantry Regiment, a regiment known for its fearless soldiers and numerous battle honours.
Poonch Attack : 22 June 2017
During 2017, Sepoy Mane Savan Balku ‘s unit of Maratha Light Infantry was deployed in the Poonch sector of J & K along the LOC. India shares a 3,323-km border with Pakistan, of which 221 km of the IB and 740 km of the LOC fall in Jammu and Kashmir. The LOC is highly active and volatile where cease fire violations occur very often and without any warning. It is also used by the terrorists for infiltration with the connivance of Pakistani security forces. The infiltration by the terrorists is invariably attempted under the cover of artillery fire or with the help of Border Action Team(BAT). On 22 June 2017, the Border Action Team (BAT), which generally comprises special forces of the Pakistan Army and some terrorists, carried out an attack on ‘Area Domination Patrol’ of 15 MLI. Sepoy Mane Savan Balku was part of the patrol which came under that unprovoked attack.
Pakistan’s BAT team was 600 meters within the Indian side of the LOC and 200 meters from the Indian posts, in Gulpur forward area in Poonch sector. The Indian Army retaliated and a fierce gun-battle ensued thereafter. During the exchange of fire Sepoy Mane Savan Balku  and Naik Jadhav Sandeep Sarjerao got seriously injured and were rushed to the hospital. However both the brave hearts later succumbed to their injuries and were martyred. Sepoy Mane Savan Balku was a valiant and dedicated soldier who laid down his life at the age of 24 yrs in the service of the nation.

Sepoy  Mane Sawan Balku is survived by his Parents.