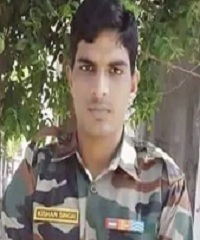 Sep Kishan Singh hailed from Bhinchri village of Ratangarh tehsil in Churu district of Rajasthan. He joined the Army in 2009 and served with his parent unit in several operational areas thereafter. Sep Kishan Singh was second among the four siblings and lost his father in 2010, a year after joining the Army. Sep Kishan Singh got married to Santosh Kanwar in 2012 and the couple had two sons, Dharamveer and Mohit.

After serving with his unit for few years he was later deputed to serve with 55 RR unit, deployed in J & K, for counterinsurgency operation.

During Dec 2018, Sep Kishan Singh’s unit 55 RR, was deployed in Pulwama district in J&K and was engaged in operations against the militants on a regular basis. On 14 Dec 2018, the security forces received credible information from the intelligence sources about the presence of terrorists in Sirnoo village of Pulwama district. Based on the assessment of the available information the forces planned a joint operation against them on 15 Dec 2018. Sep Kishan Singh from 55 RR was part of the joint team that launched the cordon and search operation in Monghama area of Sirnoo in Pulwama district of south Kashmir.

As the operation commenced in the suspected area at about 7: 00 am, the militants felt cornered and started firing indiscriminately. A fierce gun battle ensued thereafter during which three dreaded militants were gunned down. However during the heavy exchange of fire Sep Kishan Singh got severely injured. He later succumbed to his injuries and was martyred. Sep Kishan Singh was a courageous and dedicated soldier who at the age of 29 yrs laid down his life in the service of the nation.