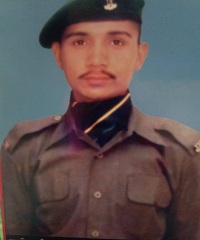 Sepoy Kalu Ram Jakhar was born on 12 Jul 1974 and hailed from Khedi Chaarna village in Bhopalgarh tehsil of Jodhpur district in Rajasthan. Son of Shri Gangaram Jakhar and Smt Keli Devi,  Sep Kalu Ram did his primary education from his village school. He joined the army on 28th Apr 1994 at the age of 19 years. He was recruited into 17 Jat of the Jat Regiment, an infantry regiment famous for its valiant soldiers and numerous battle honours.

During July 1999, Sep Kalu Ram’s unit was deployed in Kargil sector of J&K. As a part of “Op Vijay” 17 Jat was deployed in Drass sector in Kargil along with many other infantry battalions.  As part of ongoing operations, 17 Jat battalion was tasked to capture point 4875 along with 13 JAK Rifles. As per the plan in Phase I, 17 Jat was to capture Pimple I and Whale Back feature from the south and in Phase II the battalion was to capture Pimple II feature.  By 3rd July all preparations for the attack on Point 4875 were complete and the two assault battalions, 17 Jat & 13 JAK Rifles completed their recce and moved into their forward assembly areas somewhat midway to the objective. The assault by both the battalions, 17 Jat & 13 JAK Rifles commenced at 2100 hrs on 4th July. The A & D  Companies of 17 Jat were tasked for the operation and Sep Kalu Ram was part of that operation.

Before the commencement of the attack, two batteries of Bofors gun pounded the target with a heavy concentration of direct fire. Sep Kalu Ram and his comrades then commenced the infantry attack. The features whale Back and Pimple I were heavily defended and offered stiff resistance to the advance of 17 Jat soldiers. In a fierce battle, sep Kalu ram and his comrades managed to capture two enemy bunkers. During the battle for the 3rd bunker, Sep Kalu Ram got injured seriously when an enemy shell hit him in his thigh. Despite being severely injured Sep Kalu Ram in a rare show of courage and determination destroyed the 3rd enemy bunker using a rocket launcher. However he later succumbed to his injuries and was martyred.

Sep Kalu Ram was a gallant and committed soldier who laid down his life at the age of 24 years in the service of the nation. Sep Kalu Ram is survived by his father Shri Gangaram Jakhar, mother Smt Keli Devi, wife Smt Santosh Devi and brother Shri Bhagirath.