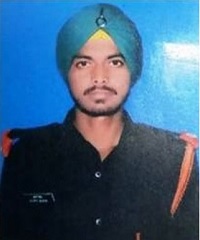 Sepoy Happy Singh hailed from Ramnagar village in Bathinda district of Punjab. Son of Shri Devraj Singh and late Smt Amarjeet Kaur, Sep Happy Singh was youngest among three brothers and a sister. His elder brother Daljit Singh, currently serving in the army was posted at Leh during 2018.  Sepoy Happy Singh joined the army in the year 2012 and was recruited into 14 Sikh LI of the Sikh Light Infantry Regiment, a regiment well known for its gallant soldiers. After serving for a couple of years with his parent unit, he was deputed to serve with 19 RR battalion deployed in J & K for counter-insurgency operations.

During September 2018, Sep Happy Singh’s unit 19 RR battalion was deployed in Anantnag district of South Kashmir and was engaged in operations against the militants on a regular basis. During his short tenure with the RR battalion, Sep Happy Singh had taken part in a number of counter-insurgency operations and honed his field craft skills.

On 28th Sep 2018, Sep Happy Singh’s unit received the information from the intelligence about the presence of some hardcore militants in  Qazigund village of Doru area of Anantnag district. The unit decided to launch an operation to neutralize the threat of militants. The assault team including Sep Happy Singh reached the suspected area and launched a search and cordon operation in Qazigund village. The team soon made contact with the militants who fired at them on being challenged. A fierce gun battle ensued thereafter with the heavy exchange of fire.

The militants were heavily armed and were firing at the troops from vantage points. But Sep Happy Singh and his comrades continued to give a befitting reply to the firing by militants. However, during this exchange of fire Sep Happy Singh got hit by a bullet and was critically wounded. He later succumbed to his injuries and was martyred at the age of 24 years. Sepoy Happy Singh was a valiant and dedicated soldier who laid down his life in the service of the nation.

Sepoy Happy Singh is survived by his father, brothers and a sister.