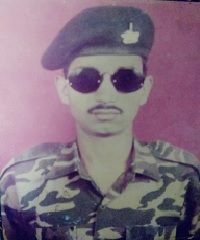 Place of Birth : Mathura dist (UP)

Sep Gori Shankar was born to Shri Nirottam Singh and Smt Chandrawati Devi on 24th August 1979 in Mathura district of Uttar Pradesh. He completed his matriculation from  Kisan Inter College in Sounkh Pachawar and he joined the army on 10 Oct, 1995  at the age of 16 years. His elder brother Ramesh Chand who served in the army in the Jat Regt, inspired Sep Gori Shankar to join the army. He was recruited into 15 Mech of the Mechanised Infantry Regiment, one of the youngest regiments in the army comprising 27 battalions. With its motto “Valour and Faith” and war cry, “Bolo Bharath Mata Ki Jai (Victory to Mother India)” the battalions of Mechanised Infantry served under various armoured formations of the army.

During 1997, Sep Gori Shankar’s unit was deployed along the LOC in Kupwara district of J & K. The LOC in that sector was very volatile and active where the enemy often resorted to unprovoked firing. It was monitored and guarded by the security forces by employing armed patrols on a continuous basis. On 05th Sep 1997, the security forces received information from intelligence sources about the presence of 5 to 6 hardcore terrorists in Kupwara. After analysis of the inputs a decision was taken by the security forces to launch an operation to neutralize the terrorists. Sep Gori Shankar was part of the team that was tasked to undertake the counter-insurgency operation.

The assault team along with Sep Gori Shankar reached the suspected area and launched the search & cordon operation. The team shortly made contact with the terrorists and cornered them. On being challenged the terrorists fired at the troops and a fierce gun battle ensued thereafter lasting  several hours intermittently for the next 3 days.  During the gun battle  five terrorists got eliminated and the operation successfully ended by 08 Sept 1997. However, during the operation Sep Gori Shankar sustained serious injuries and was shifted to the hospital. The brave-heart later succumbed to his injuries and was martyred. Sep Gori Shankar was a valiant and dedicated soldier who laid down his life at the age of 18 years in the service of the nation.